I was talking to my cycling buddy as we took a break from the ride. I had read an interview with some photographers, one of which was Kevin Abosch. He of the expensive potato picture. We wondered how that massive price had come about. What made it worth so much? We talked about art in general. I guess I just don't get it. Art, when it's painted, or sculptured tends to mean a one off. So I can see how the value, especially over time can grow.
I am at a lose though to see how some modern art is so highly valued.
Again it is a one off, even if the piece is produced again. It's not going to be exactly the same. But I don't understand what it is most of the time. Or what it's trying to say.
It appears to me at least part of it's value is who the artist is, not the piece itself.
Once a group of people collect the artists work, they buy everything. Why? Bragging rights, a show of wealth, or a way of demonstrating they are part of the group who understand in a way others are just not capable of?

Then I come to art photography. Again this is just my opinion.

When you buy a piece of photographic art. It can easily be reproduced. Just printed again. I'm not saying because it is a photograph, it can't be art and highly prized though. It's just not unique in the same way.

I tend to shoot pictures that are either personal to me or the subject. Or that satisfy a requirement. So not really art in itself. Although I hope some of them would be seen as artistic.

Maybe I'm just too literal a thinker. It has to be obvious. And that's my failing, not the artist's problem.

Here is the potato in question. 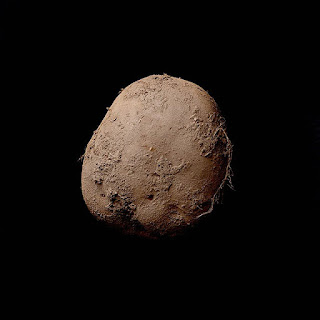 Quote from Peta Pixel, I think, illustrates why I am confused about art. “Kevin likes potatoes because they, like people are all different yet immediately identifiable as being essentially of the same species,” “He has photographed many potatoes. This one is one of his favorites.”

What do you think? What am I missing?

For more of my work, go to my Facebook page.
and
website
Posted by AFS Photography at 14:29:00 No comments: