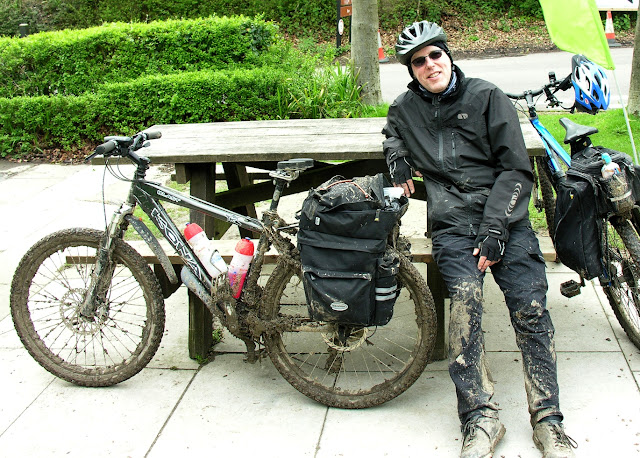 Bike mainetance maybe cheaper than yearly spending on a car, but it still a consideration.

Two new tyres for the Kona, one for the trainer, sorting a brake problem on the Giant, a new lock and rear light cost around £150 over the last thirty days. I don't commute so my outlay could have been higher.

Each time I have ridden into work I've saved £14.10, so that's £52.30 in total. Doing it everyday would cause more wear and tear, although I'd still be ahead over the year. I'm glad though that it's only once a month, because WFH is even cheaper.

What can I do to reduce costs?

Keep the bikes clean; something I have been very bad at in the past. I rode until they stopped, then half-heartedly pointed a hose at them. My mileage has increased considerably over the last couple of years so that level of concern would have resulted in way higher expenditure. I'm sure Ross looked on with dread as I walked into his shop back then.

The picture at the top is a bit extreme. Half way along the South Downs Way the bikes were suffering; at several points the wheels were so clogged they stopped turning. We did hose off the worst of it at the overmnight stop. But hadn't planned, as I would have now, to at least bring chain lube. Everything was pretty badly worn at the end.

The view above is what the bikes would usually look like. There was a gradual build up of mud, not so bad for the frame and wheels maybe. But not good for the brakes and gears. I used to get home, lock up the bike in the garage and forget about it for a week.
I once had a b&b owner not want my bike taken inside for overnight storage because it looked so bad.
Only when the chain started to jump off the sprockets at almost every change would I head over to see Ross. A cursory clean would never provide the hoped for improvement. Everything lasts a lot longer now, and Ross has a smile on his face as I approach.
A clean bikes makes dealing with punctures and a dropped chain nicer as well. You still get a bit mucky hands but it's an easier clean.
It's also a good time to check for damage or fatigue. It's better to deal with something you discover now than on the road when a failure could have catastrophic consequences.
----------------------------------------------------------------------------------------------------------------------------
Russell if you are reading this; I know what you're going to say about my clothing. In my defence, I didn't know any better and black was pretty much the only colour companies produced back then. It was almost all off-road too.