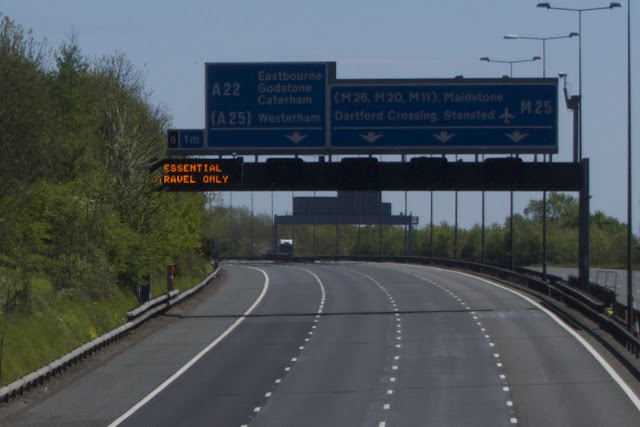 Every day that I get out on my bike, I am thankful. It's certainly essential travel for me. I tend to avoid controversial posts and keep this blog for my photography projects and cycling.

Having said that; I have to make a comment about the press and cyclists.

I really don't know why they have what appears to be an agender to reduce support for and participation in cycling.

They report about climate emergencies, pollution and increasing congestion. While at the same time writing articles criticising riders.

Since the lockdown they have gone into overdrive, and are now including runners and even those choosing to walk.

These stories are having an effect. Parks are closed, and signs are going up "banning" cyclists from passing through villages and towns.

Close passes and aggressive driving was on the increase before this crisis, with less vehicles on the road it hasn't diminished.

There are a lot more cyclists, runners and walkers that need extra space. The reduced traffic has given some a green light to drive faster and more recklessly. The stats say driving has been reduced to 1950's levels, but speeding cases have increased as a percentage of road use.

The morning news still has many reports of collisions causing congestion and hospital admissions.

Cycling, walking and running should be promoted, not just during the lockdown, but afterwards. Public transport may not be used in the early days after it's the restrictions are lifted, we don't want everyone driving.

Many people may realise there are other ways to get around. Particularly for commuting and shorter trips. Some reports say 56 per cent of all car trips are less than five miles in length and six per cent cover less than a mile - less than a mile - think about that. The average walking pace is 4 mph. So that walk of one mile takes about fifteen minutes. In towns and cities it could take longer to drive that far. Even five miles may take longer in a car if congestion is heavy.

Surveys have reported that more people would forgo their car if the roads were safer. During lockdown more people have ventured out on bikes. Their experience could shape the likelihood of continued riding.

Councils may make new infrastructure that encourages alternatives to driving a higher priority.

Communities may see that less cars improves their area.

People could experience the benefits of exercise, and of being less reliant on the car.

The media should be praising those people taking exercise and riding, possibly for the first time.

Or is this an opportunity that will be missed?

Journalists are now asking cyclists to get in contact with them. I fear that may be one fire damaged river crossing few will want to use.