Cycling could save the world. 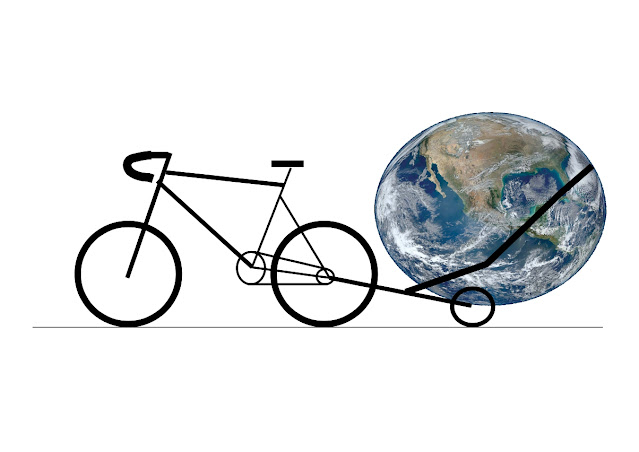 I work in London one day a month; due to the reduced train service from my station takes me almost two hours to get in.

It's only eighteen miles, I could ride it in just over an hour.

I have my laptop to carry, hopefully soon to be replaced with a lighter version. I'll need a waterproof backpack for it.

What else is preventing me?

Lack of safe cycling routes into Croydon, and then after that until I get to central London.

Croydon and Central London are getting better, heavy traffic between them would still put me off.

Surrey County Council are like most of their kind; unwilling to build what's needed. Despite pledging to reduce pollution. Their main hope seems to be electric cars, which still cause pollution, congestion and road danger. And further penalise those who can't afford cars. They may even mean people drive more often, because they are seen as cheap to run. Here are some stats about the UK's addiction to driving. It's predicted that the speed of London traffic could drop below walking pace. It would be much better to make public transport cheaper. And encourage walking and cycling.

Stats show that reducing through traffic increases local business. Where alternatives to driving have been encouraged the local economies have seen a boost. Particular hospitality; they have more seating outside under covered areas. Additionally secure bike parking will be needed, I'm not going to ride to the shops if my bike is likely to be stolen. There is huge amounts spent on safe car storage, and now charging, why not spend some of the cash for bikes?

Using the train for longer journeys should also be cheaper, and easier. I'm starting to plan how I will get back from Cornwall next year. My challenge for the charity Mind will be a dawn to dusk ride on the summer solstice. Whilst it will be tough, about 250 miles in 17 hours, the return home has the potential to be more stressful. From what I have read, travelling by train with a bike isn't easy. The storage provision is in most cases badly thought out and difficult to use. Just booking it appears to be complicated. I'm actually contemplating riding back, over three or four days.

We are being bombarded with adverts for new electric or hybrid electric cars. All are bigger than the cars they replace, a lot are four wheel drive. Also worryingly a lot have enhanced multimedia integration. Big screens that could display distracting info, there are already problems caused by smartphones.

People will be paid to ditch fossil fuel for electric four wheelers, but only the ride to work scheme for bikes. Why not spend the same amount to provide commuters with e-bikes?

France is going to ban national flights where a rail service exists, and continue to pedestrianise more of Paris. England will expand roads, Scotland has pledged to stop all expansion. Wales is bringing in a 20 mph limit for urban roads. Why doesn't the whole UK move forward in the same way? Has England not heard of induced demand, the more space you make for motor vehicles, the more will use it. The M25 is a prime example. It was built with three lanes, some sections now have five, it's still congested morning and evening. Urban areas have more lanes on major roads, they are the same. Planners don't seem to have learnt anything from the past. As Einstein said; insanity is doing the same thing over and over and expecting a different result.

The NHS would benefit, a fitter population would make less use of it's services.

Reducing the average of 1800 people killed on our roads, with over 25,000 seriously injured would again reduce the impact. Much is made of cycling on pavements; adults shouldn't but it's likely as a result of roads made unsafe by drivers behavior. It's a sign of failed or nonexistent infrastructure. One report I read, suggests the annual cost to the economy is £36 billion. My complaint about the articles, including the government site is that they all say accidents, not collisions. The media always use the word accident. This report says most involve error or misjudgement. This is part of the problem, the police use the term RTC, road traffic collision. The media should state the same fact. You will it's always a car, van, or lorry hits pedestrian/cyclist; car, van, or lorry hits building. The driver is absolved from responsibility by these reports. Why is that?

Many police forces now allow online reporting of dangerous driving, unfortunately what they do with the reports is often very disappointing. Some are great, others rarely act on the uploads. In general road crime isn't seen as a priority for courts. Surrey Police have often said to me that they wouldn't prosecute a driver because the CPS won't want to deal with the case. If it does go further the penalties are very lenient. Once up to 12, drivers can claim exceptional hardship. There could be 10.000 people on our roads with more than 12 points. If driving is so important to you don't drive in such a way that accumulates points.

The UK once relied on the bicycle for mass transport. The Netherlands has a similar climate; one of the excuses for not cycling, more people ride everyday than here. It is flatter, but using an e-bike means that's not so much of a consideration.

There just doesn't appear to be the will to move forward with any speed. Plenty of words in the reports published by local government, very few results.