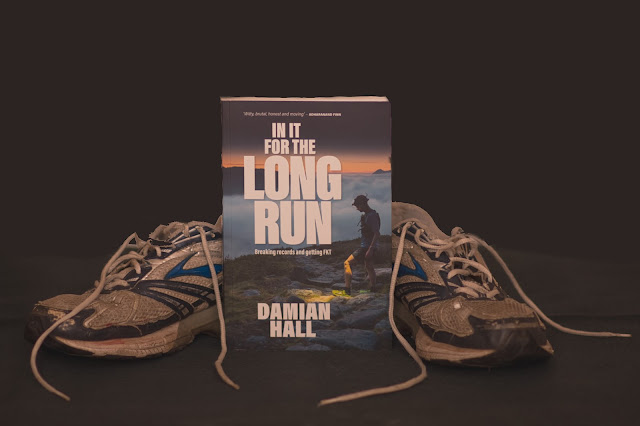 I've been reading In it for the Long Run, by Damian Hall. Available here.

I was interested because it's more about why he completes in endurance events, like most of the books I've been reading. And less about how; the technical stuff is interesting and useful, but not always as riveting.

Obviously what I do is several leagues below Damian's achievements. I haven't and will not be representing my country. But the thoughts that drive me to new challenges are the same. And better explains my future goals.

We do have a tenuous link; at school I ran cross country whenever I could. My reasons differed though. I didn't particularly like running, but I had a greater dislike for team sports. I was good at neither.

Damian talks about his obsession, or addiction to running. Focussing on it, at times, to the detriment of other commitments. To be as successful as he is, you need to be. I can be as focused and I'm not always comfortable with being that way.

He touches on weight issues, a coach he had early in his career insisted he keep shedding the kilos. It's certainly on my mind at times. Being light means fast up hills, but not eating enough also means a lack of energy, and endurance. And longer term health implications. I have it under control now, but only because I don't want to be slowed for any reason. I follow cycling and it's an issue that is just starting to be talked about.

I've previously written about food, or fueling whilst riding. I can now add another item to the list; custard. I haven't tried it; let me know if you do. Obviously I'll make a vegan version.

Everyone has heard of running marathons, even doing them many days in a row. Damian would run one before breakfast. Or as a commute to work. I have no comprehension how that must feel. The distances ridden and have planned elicit surprise and disbelief in family and friends. It's the same reaction Damian's book produces in me.

What marks it out as a great book is the humour and "matter of factness"; if that makes sense. The achievements attained and challenges overcome are incredible, but there is no boasting. Just insight into what drives him, and how he prepares.

Unfortunately it was such a good read, I finished it quickly. I took every opportunity to discover what he did next; to learn more.

If, like me, you think that running 26 miles is a long way; then you have to read this book. The human body is capable of covering amazing distances. What's even more incredible is that these are off road miles, many in the dark, and the middle of nowhere.