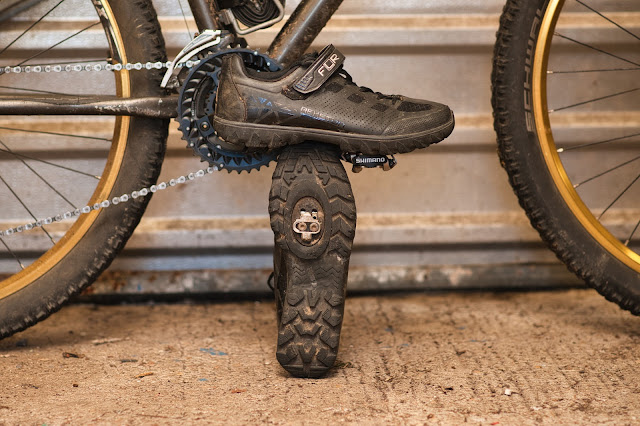 Over the weekend I tried clipless pedals. I know I may have said it would never happen, but I wanted to see if they could make my riding more efficient.

I had shoes with the holes to attach cleats, the part that clicks onto the pedal. I bought the pedals from ebay, it's much cheaper than new shoes and pedals. The type I bought are more usually seen on mountain bikes, but if I am comfortable with them the road bike will get a pair. The reason I bought the shoes last year was the stiffer soles and you can walk normally in them, unlike their road specific cousins.

I may need to explain to non cyclists, clipless means you are attached to the pedals, but not by toe clips. If you aren't a rider, don't worry if that doesn't make sense. It's just the way it is.

Being attached to the pedals means your foot can't move around, it can't slip off and you can apply force for more of the rotation. I'll need to adapt my technique to see the benefits.

The downside is that you have to remember to unclip when you stop though, or crash to the floor.

Some initial thoughts after  about 70 miles:

I practiced clipping and unclipping in the garage. I had to tighten the tension screws that determine how firm they grip the cleats. I had them turned right down, but I couldn't tell if I was fully locked in and the slightest movement released my feet. I tightened them to about mid way. Initially all went well.

I had to plan the stops earlier than before and anticipate if I might need to put a foot down.

I had more of an issue attaching myself as I moved off. Finding the cleat and remembering it's easier with my foot at the bottom of the rotation.

I must have been riding with my toes pointing outwards on the flats, now it feels like my feet are being twisted inward, when they are in fact straight.

I'm not sure how much difference they have made; I can feel more power transfer when I climb, especially standing. More muscles are in use, I had a little ache from some I didn't know I had. Accelerating feels a bit quicker.

When I change down for a hill I don't get a "floaty" feeling as the cadence increases.

On Saturday I went over to visit my sister and mum, nearly thirty-three miles, with an average speed of 13mph; pretty good for the mountain bike. It bodes well for the hill climb next weekend on the road bike.

There were plenty of times I needed stop, and unclip, only a few caused a mild panic; I was trying to disengage by pulling up and twisting. Just twisting was best, and almost the default by the time I got home.

Then on Sunday just as I was gaining full confidence, I failed to unclip outside my garage.

At least there was no audience; other people's experiences' included a bemused or shocked group of people on hand to see their fall.