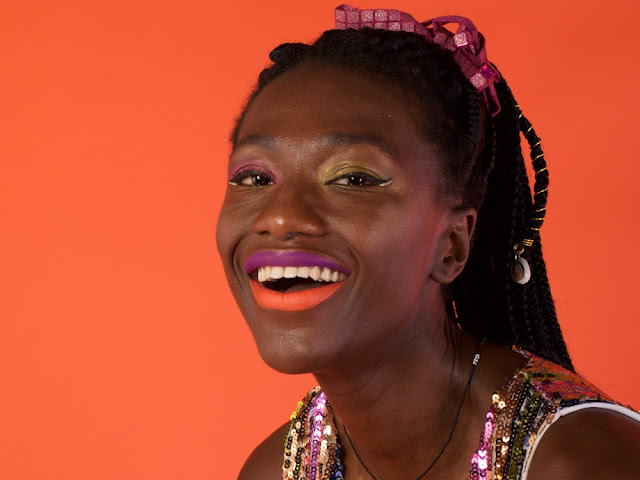 At the end of last year I contacted a model I had worked with a few times. I knew she had contacts in the design and fashion world that may enable me put together a bigger collaboration. It is part of my goal this year to push my photography, and set challenges.

The project was on hold until Marilyn finished at London Fashion Week. It was a good opportunity for her to talk to people about it. When she told me there was a makeup artist also interested I was very excited, tempered with a little trepidation.

I started setting up the lights and a white backdrop, Marilyn arrived and said, "that won't work with the clothes". As we started to look at them I could see what she meant. There was gold, orange and pink; really bold and shiney. A short pause then while we evaluated all of the choices. Bright orange was tricky to light evenly but I am so glad we used it.


The initial makeup took longer than I expected to be applied, but it had to be right, and it did allow time for the studio to warm up. I rarely work in a warm studio, this one was big, with a high ceiling so not easy to heat. But much smaller ones are also generally cold. Ok for me, I can keep a jumper on, but it's not the same for the model. It was okay towards the end, I'm not sure what else they could do. Maybe a space heater like those in garages etc. But they are noisy.

Once we started it became obvious how much harder this was going to be then my previous shoots. The extra pressure of delivering on a promise to a client was at the back of my mind. I leant on Marilyn more than a photographer might normally do, or at least that's the way it felt. I have watched commercial shoots on youtube, the model doesn't seem to have much input. As I become more confident I'll need to take charge. Although I hope I can still make the process a team effort.


We had an hour at the end of the shoot to look at the pictures on the computer. But time didn't allow us to decide a final number to edit. There were too many to choose from. We'll work online to put together a complete set.

It is said you need to take lots of pictures to improve I don't think that's the best advice unless each shoot pushes you to try something new. Be that equipment, style or location. I see a lot of portfolios where all the pictures are very similar. The photographer has one idea and sticks with it. Often shooting the same model again and again. For me at least, I would soon get bored.

I have attended workshops, but they didn't deliver for me. I have improved because I have challenged myself with each shoot. Working with good models is also the part of the journey. This shoot for instance, I learnt so much. Not just about lighting, the choice of backdrop etc. The clothes designer wasn't at the shoot, but Marilyn involved her. Sending short videos and back of camera shots. I hadn't thought of doing that.  But now I realise how brilliant an idea it was.

For more of my work, go to my Facebook page.
and
website
Posted by AFS Photography at 13:15:00 No comments: