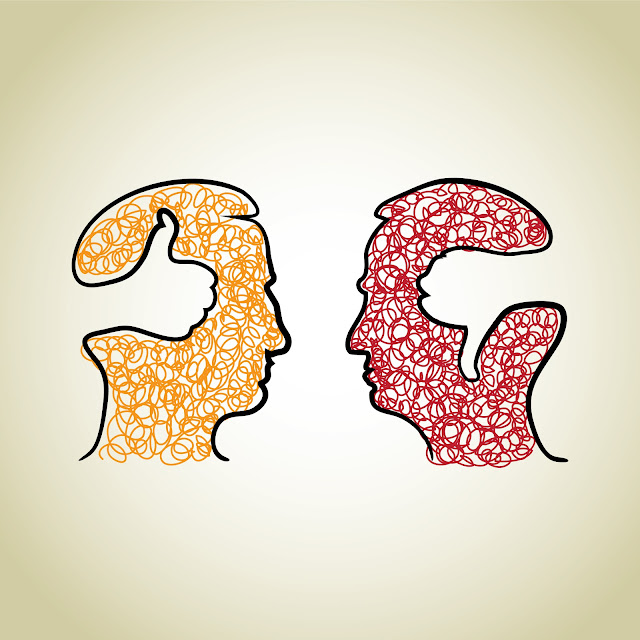 A couple of weeks ago I had a tough and great weekend.

The good bit; I saw mum, my sister and family, I even cycled over there. Really pleased that I did, not only because I haven't seen them for six months. It was also nearly as fast as driving would have been; heavy traffic most of the way. It was great riding past so many stationary cars. I didn't get soaked until the homeward journey. I think just over an hour on my mountain bike covering 15 miles each way is very satisfactory.

The bad bit; starting on Friday I didn't sleep much, I was tired, but just couldn't let go. I don't know what I was thinking or worried about that kept me awake.

I tried a hot drink, reading, just laying in bed staring at the ceiling was never going to work. Sunday was an early start, I had arranged a sportive, the subject of a previous post. I enjoyed the ride, but wasn't that feed up that it ended early. I even gave my bike a thorough clean when I got home. If only I hadn't lost my gloves. Probably left on the wall when we stopped to assess the failed brakes.

But when Monday rolled round, I was knackered and feeling very low. I survived the week, gradually feeling better each day. More in this post.

There is a voice that tells me I did well, but I ignore it. The other voice saying the opposite is much more persuasive. I have to listen to the positive one.

I need to give myself a break, not be so critical. And accept praise when it comes my way.

There are other parts to this: imposter syndrome, always being convinced I just said something that will make people avoid or dislike me, being over critical, over thinking.

I know most people experience these from time to time; they can't be allowed to dominate, that's my problem. 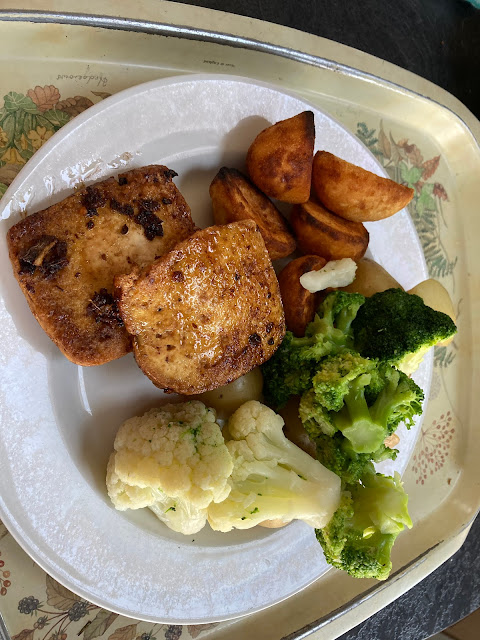 I blame it partly on Netflix. I watched a documentary called Game Changer, about people who had become vegans. I found it very poor; it seemed to be a sales pitch, propaganda if you will. There is little compelling info, just selected people who evangelise about the cause. Athletes talked about becoming vegan and finding incredible performance improvements. Other people claimed their lives had greatly benefited. The arguments put forward were badly discussed, and misleading in my opinion. There is also too much anecdotal "evidence" for me to take it seriously. It certainly didn't persuade me.

But it did get me thinking more about the subject. There are far better documentaries the "...spiracy" series is one. The first one was cowspiracy, followed by seaspiracy. Whilst not without an agender, and a conclusion to confirm they are more fact based. Some comments have been reported as being taken out of context by the interviewees.

Since watching them I have made some changes; it's been gradual, almost without me realising. I do still eat meat, maybe once a week. I don't drink cows milk, replacing it with oat milk; barista version. I'm not sure how the barista version differs but it makes better tea. I think it tastes fine, unless you drink it straight you wouldn't know it wasn't bovin derived.

I go for the vegetarian pizza and pies, and no longer eat fish. There are plenty of plant based alternatives, some better than others. I tried making a Sunday dinner from Tofu, it wasn't a great success. It's the picture at the top of this post. I was unprepared for how wet it is, the recipe didn't say that I really needed to dry it out before frying. The result was edible but the consistency wasn't as appetising as it could have been.

Apart from the "tofu incident" I'd say it's been okay. Maybe my meat consumption will drop further, I don't know. If I'm eating out I'll go for the vegetarian option, if it's likely to be tasty and not an afterthought addition to the menu.

I don't think I have experienced improvements to strength or stamina - it's been no game changer - and my weight hasn't changed.

This post isn't about trying to make anyone change. It's just my thoughts and experiences. I'd suggest you investigate the subject and make up your own mind. My nephew is vegan, he doesn't make a big thing of it, he'll talk about his decision without preaching.

Another change I realised whilst writing this; I don't really want alcohol anymore, I was never a heavy drinker, maybe a glass or two of wine a month. There is rum in the house, but I just don't fancy drinking it. When I eventually visit a pub or restaurant again, I very much doubt I'll buy a beer. 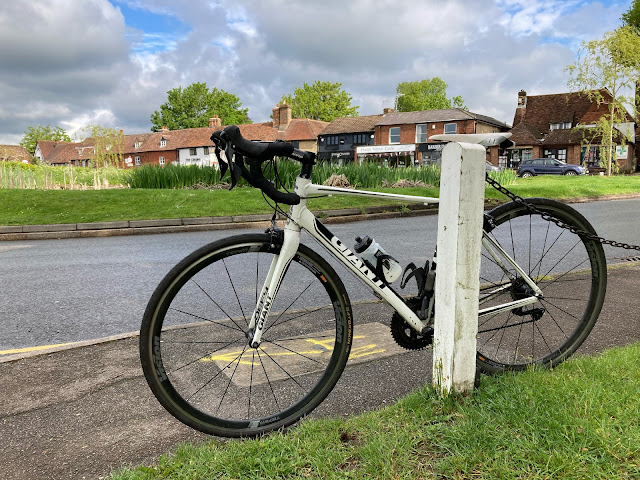 I missed an evening ride, my mountain bike needed new brake pads on the front, and I just couldn't face the weather. I was also very tired, read more about it in a future post. The rest of the week was in the garage on the trainer. Everyday was sunny; right up until I finished work, then it rained heavily. Although the incredibly strong winds were probably too dangerous to ride in as well.

I always work harder on the trainer, there aren't any downhills sections you can coast along. If you stop pedaling, the rollers stop.  I always notice an improvement in my fitness, stamina and strength after a week on the stationary bike. So it was no surprise that my ride to Otford was quicker than I expected. Another trip down memory lane. At school and into my twenties a mate lived near the green. I rode past it on my motorbike most weekends, around thirty years ago.

Sunday was the usual meet-up with Matt in Westerham. I hope I don't jinx it but "our" bench was free again. It's a massive and carved from stone. I don't know why but everyone seems to prefer the wooden benches or wrought iron chairs.

The Costa has also become the favoured meeting place for a group of Hells Angels. It started with a few Harley riders; this weekend saw about a dozen of the gang arrive, have coffee and then roar off. All very civilised and no bother to anyone.

It rained again, just after I arrived home, Matt got home dry as well. Hopefully the weather will improve, I have a week off at the beginning of June.

Other news, Marcia and I are now fully vaccinated. Neither of us had any side effects, it's good to see life getting back to normal; except for the continued increase if traffic. My ride to my mums a couple of weeks ago won't be my last, I wnat to avoid driving as much as possible.

These events are organised rides that are not meant to be competitive.

They are great for stress free rides, the route is planned, they have food stops and normally mechanic support.

Unfortunately some people can't help themselves. Once the timing chip is attached the red mist comes down. Which is wrong, the roads are open to all traffic and it shows cycling in a bad light. Not the case for me, I wanted to take it easy and enjoy the countryside.

The first one I rode was with a friend a few years ago. We were on mountain bikes, the rest on road machinery. The surprise was that we weren't the slowest participants.

I've since ridden other organised events, two RideLondon's and two Caterham to Canterbury.

It was a mostly an off road loop from Cranleigh.

Social distancing was still in place. Small groups setting off at one minute intervals.

It was grim, raining nearly the whole time. And I don't know where they got gravel trail from, a lot of if was think mud. More than once we had to get off and push the bikes. They took a hammering, mine is making noises it wasn't before the start. Another member of the group had brake failure on a very steep, slippery descent. We waited for assistance, but it wasn't fixable at the roadside so they called in the rescue van. I could have continued, but to be honest I was cold and wet. So I took the easy option and also jumped in the van. We had completed 22 of the 47 miles, I was happy with that.

Here is the scary moment.

Let the pictures do the talking

The evening are getting lighter and warmer, presenting more opportunity for photography. So here are a few pictures you may not have seen. I'm so grateful for having beautiful countryside on my doorstep. 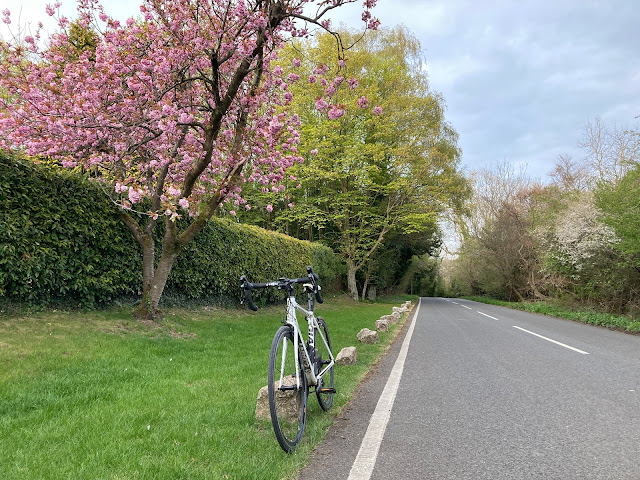 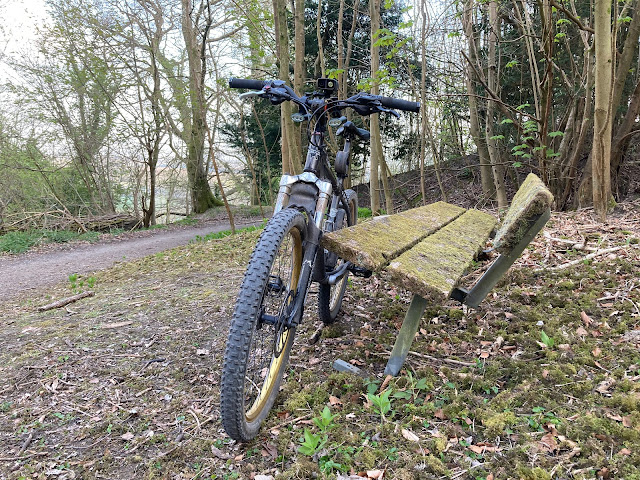 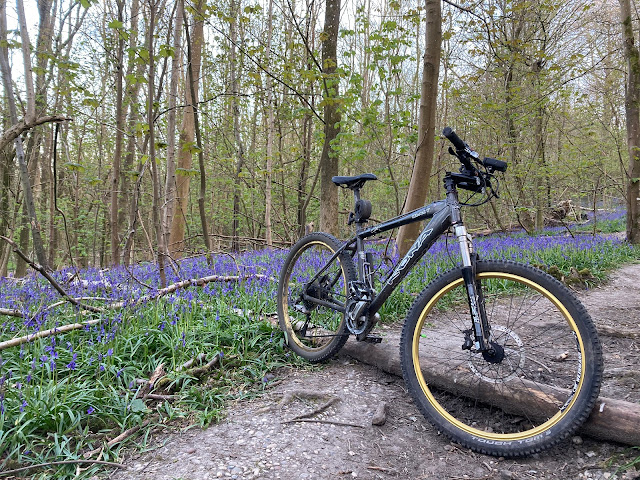 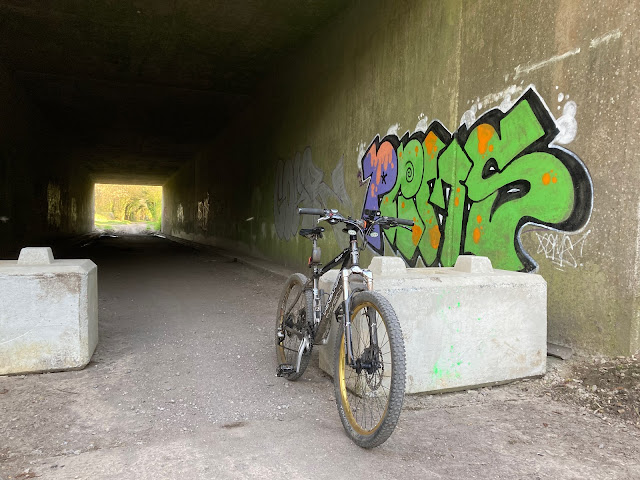 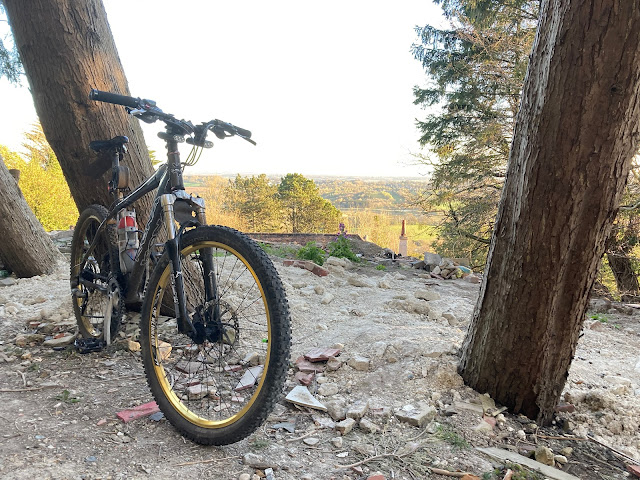 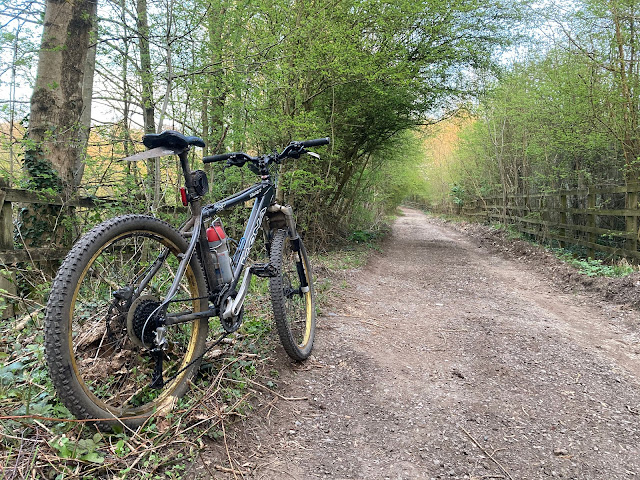 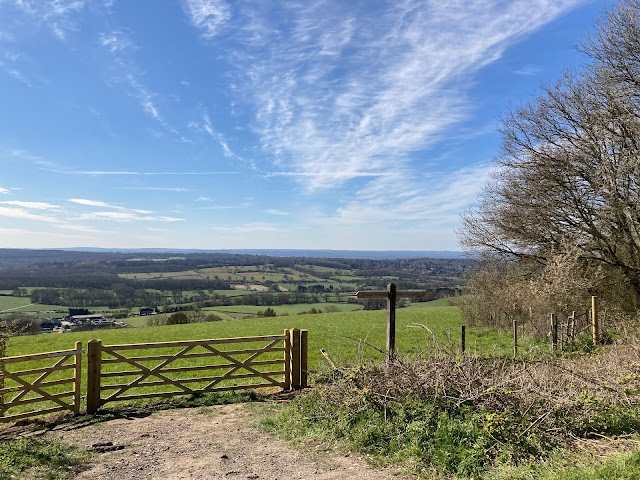 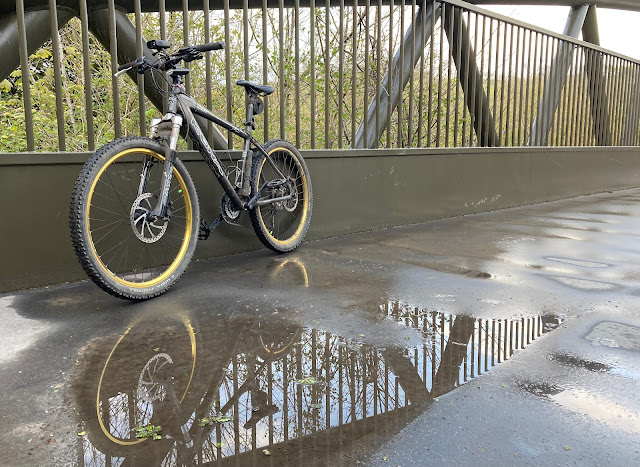 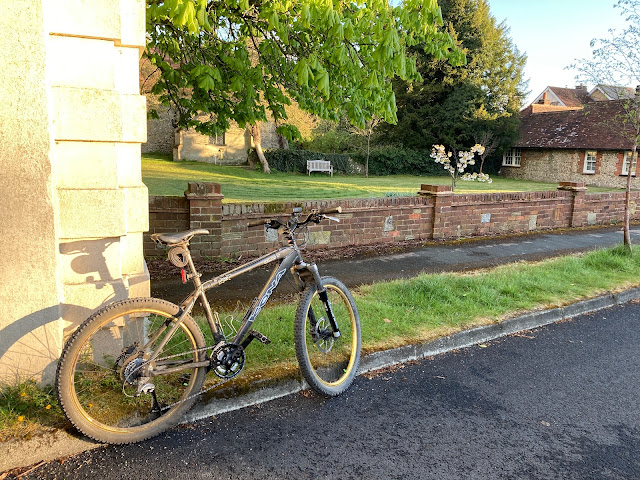 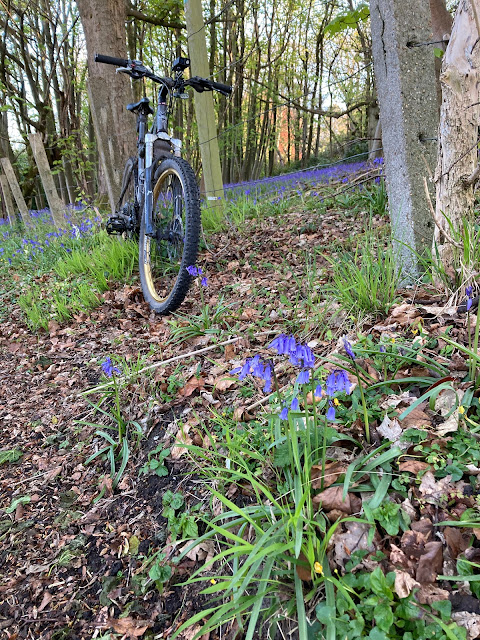 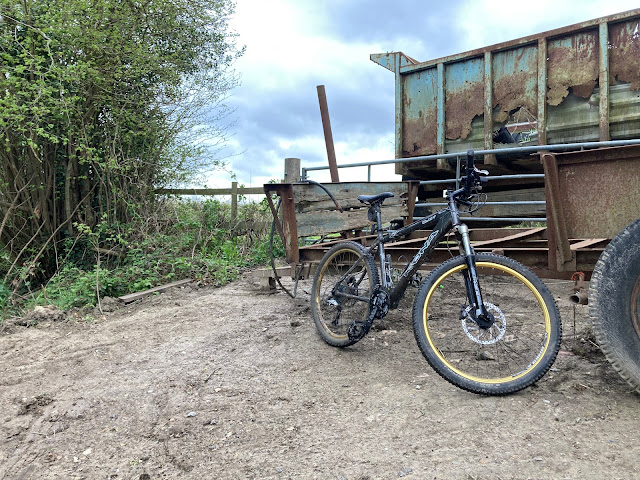 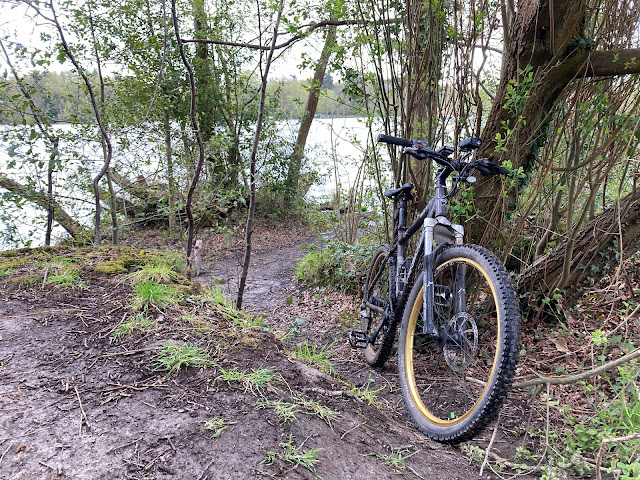 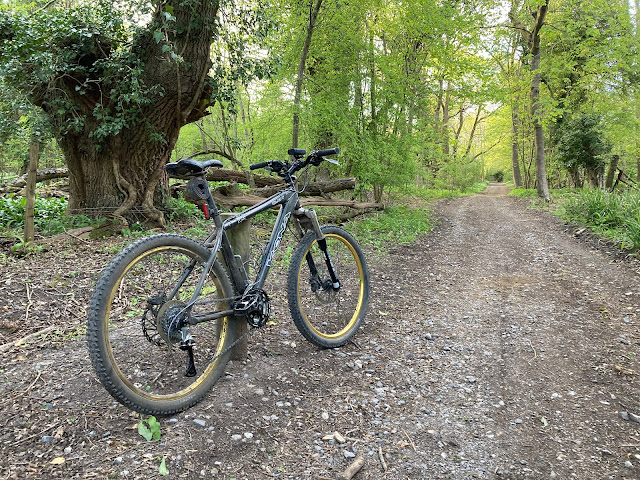 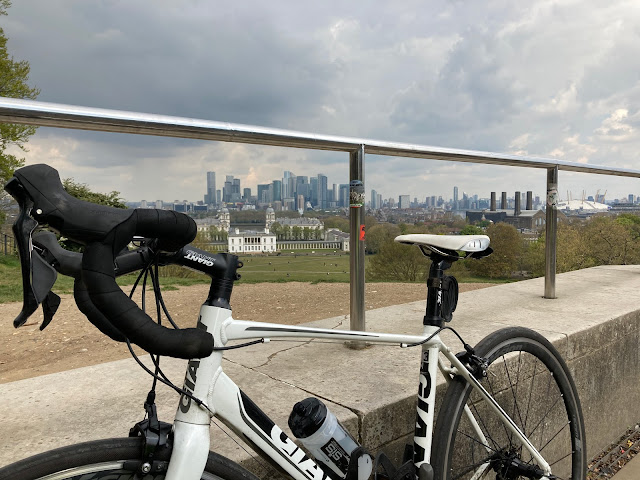 The title should really read; the need for high average speed, but it's less catchy. This is the way I measure my improvement in fitness; can I increase the overall pace at which I ride?

Highest speed if it's just the peak attained at one point of the ride doesn't mean a lot, it could be downhill, or for a short period that leaves you completely exhausted and unable to continue.

If I were racing it may be different. Another measure could be power output, that would mean buying a power meter. It would be interesting to see how much I could produce and for how long. But they are very expensive, so that bit of info will have to remain a mystery.

Strava helps a little, I can see times for climbs and sections I ride regularly.

I'm not sure what the ultimate aim is; compete in races, or just keep it interesting. Am I being sucked into the cycling scene a little too far? Maybe I need to forget the techy stuff and just enjoy riding.

I have noticed that when riding with the club in a faster group ride than before I can now keep up and even overtake on hills. The first time I rode with the this group it was tough, now it's not so bad. It is still a social ride, with a cafe stop, which is more important. Then meeting Matt on Sunday is purely social.

Face to face chats are so important, even if we have to sit at opposite ends of an outdoors bench. Hopefully the weather will continue to improve to make this possible every time.

The work is paying off, I was just going to ride to where I grew up, Greenwich Park in particular. Instead of riding straight home I detoured out to Biggin Hill. Two uncles had stables in the area when I was young. I'd spent a lot of weekends there in my teens when I shared ownership of a pony with my brother. We would ride our bikes down on Saturday, sleep in the hay loft and come back Sunday in time for dinner. As I rode past the Hurricane and Spitfire they have on display I realised it had been over thirty years since I'd last seen them. Where did all that time go?