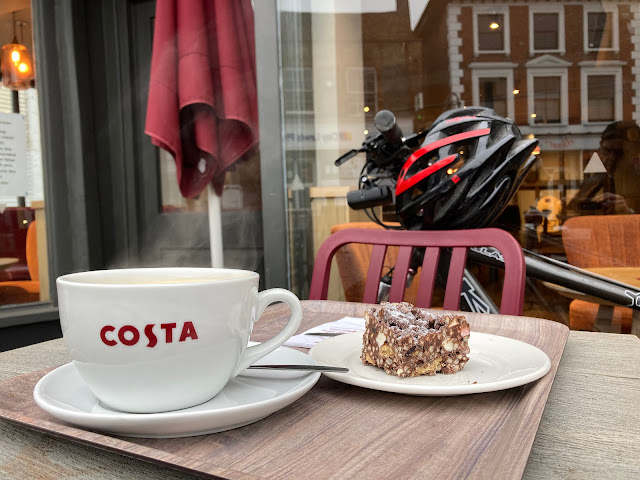 You're from sarf London, right? That's how the conversation started. I arrived in Westerham and walked into Costa Coffee, past an old guy (OG) sitting near the door. Soon after taking a seat the guy moved to the table next to mine and asked if I was from sarf London, a question that initially caused a furrowed brow. How did he know where I was from? Then it dawned on my; he had heard me make my order. My accent had been distinctive enough for him to make a good guess. I confirmed my birthplace as Charlton; that led him to start talking about 1970's football, and the stadium in particular. I said I didn't follow the sport and had never visited the ground. That didn't stop him explaining the changes over the years, and how his club, Chelsea had fared in matches there. I tried to partake in a back and forth but I was struggling until Matt arrived. He isn't a fan. but knew enough to prolong the chat somewhat. Then he remarked on a Sex Pistols badge worn on the OG's denim jacket. Music being a subject he knows a lot more about.

That kept the dialogue going; OG had been a drummer, bass player and singer in various bands. OG mentioned a gig he had done where just one person had clapped at the end, we agreed that was very rude. I once went to see a band who had me on their guest list, the rest of the audience had also got in on the same list. Being in a band and playing small venues isn't always glamorous. OG had lived a varied life, having many careers saying some people avoided him because of his wild hair. It didn't seem that bad. He mentioned that to some it made him look like Doc from Back to the future. Matt and I agreed. My suggestion that impersonating Christopher Lloyd could be his next career path had him laughing.

It was time to head for home, we said our goodbyes, he was off to a rehearsal space to practice in preparation for restarting his drum teaching. We wished him good luck.

On the way home I diverted to investigate a teepee near Botley Farmhouse. There was no info explaining the reason for it being there.  The adjacent barn is a wedding venue, so maybe it's part of that.