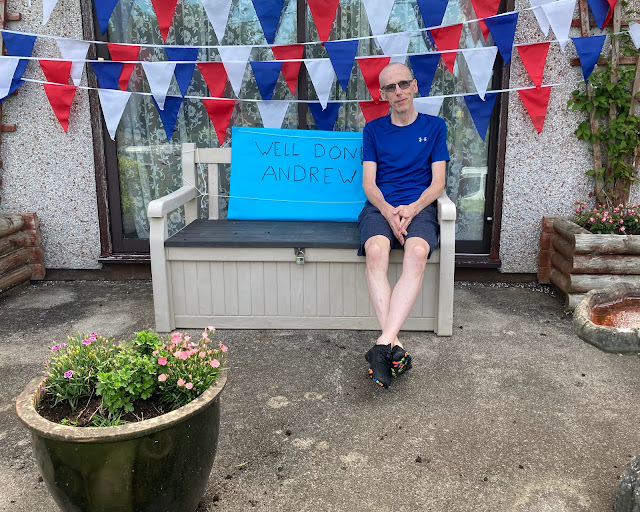 I write this as I rest from the week long ride to Cornwall and back.
I gained a lot from it:
Proof of my recovery.
A good indication of where my physical limits may be.
And possibly most important to me; that I have more control over myself and how I react to life.
I am stronger mentally than I had thought.
The week before this adventure I had a telephone mental health counseling session. Beforehand I filled in a survey that would form the basis of the conversation.
It was questions I had used before previous therapies. This time I found myself surprised by my answers. I seemed to be choosing more positive responses. I wanted to be honest so ticked boxes with my first reactions.
When the therapists called it was the first thing about which she remarked. I had gone from a score indicating a very depressed person to one who had little indication of a problem.
We talked about what had happened to possibly cause such a change. I suspected it was my broken hip; let me explain.
Looking back at the immediate aftermath I hadn't really broken down and regressed mentally as I might have expected. I was disappointed with the result of the x-rays and scans. With a bit of a big dip when told by the consultant that there could be lasting implications.
But those feelings didn't last. I think this was partly because the day after the surgery I had a visit from a physio. He said I could get out of bed if I wanted, and using a frame move around the ward. I had some exercises to reduce the swelling and stiffness. I could do as much as I wanted. So I did; spending all of my time whilst in bed flexing my leg. The rest "walking" around the ward. I saw small improvements each day.
The next two weeks were a rollercoaster for sure; with some very dark times. I was very frustrated at the limits imposed on me. But I never gave into thoughts that I wouldn't fully recover, I just needed to work hard enough, it was down to me.
I said to my therapist that the experience had maybe taught me that I was a better, stronger person than I believed. This was helped by feedback I was getting from family, friends and my cycling club. Everyone was congratulating me on my progress, encouraging me to push on. The difference this time was my reaction to the words. In the past I would have told myself they were just platitudes; not true of me.
As I reached a new milestone those words took on my resonance, and without me realising were reinforcing my positive inner conversation.
I reduced the priority given to my negative monologue.
The discussion was so positive that we agreed that I could put future meetings on hold for now. I had the tools to recognise the start of a downward trajectory, and turn it around.
I'm not saying I am cured, but that I am better than I've been for a very long time. It's like a switch had been flicked to a new position.
We concluded that whilst crashing a bike was maybe not a recognised treatment for depression. It had had a positive outcome for me.
I keep saying this. Talking has been the deciding factor in my turnaround.
If I hadn't done so, the outcome of my crash, and life's pressures in general could have produced a very different result.
It's why I rode to raise money for Mind. They promote talking, crucially providing resources for those who don't have the support network I am lucky to have.
Thank you to everyone involved over the last few years since I started my recovery.
Posted by AFS Photography at 09:09:00 No comments: