Why I joined Oxted Cycling Club 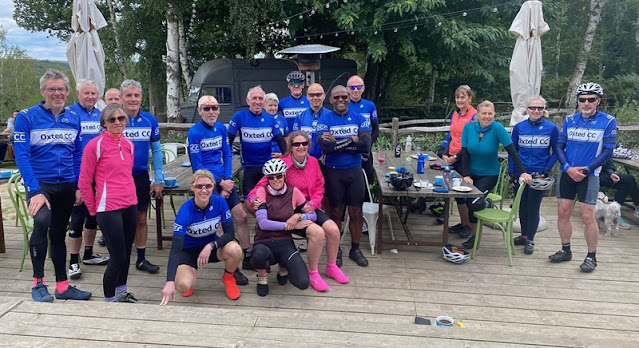 I started riding as an adult in 2005. At first just to do a charity ride of 15 miles. The next year I agreed do to 50. That meant some training. I was given a bike and half heartedly rode a bit more. After that a friend and I committed cycling together at weekends. We quickly got fitter but didn’t venture very far; about 40 miles in total spread over the two days. We did at first find new routes, all with a similar distances.
Occasionally I went further, Brighton, even Paris. The first of two RideLondon’s meant I bought a second hand road bike. Before then even the long trips were on my trusty Kona mountain bike.
I bought a better road bike just before Covid. I had lots of time off, but no-one to ride with and no cafes. As the restrictions were eased I knew I had to broaden my riding horizons. Of course without forgetting about friends who kept me going over so many years. I spilt the weekend between the two.

I hadn’t considered joining a club before, I thought they were all just riding fast on expensive bikes. I wanted more social occasions. It was then I recollected a sportive from a few years previously. It had been a very hot day and by the time I got to the last food stop I was pretty much finished. I don’t remember how I got talking to Pat and Amanda who were riding a tandem but their Oxted Cycling Club jerseys remained in my memory. Pat gave me a couple of energy gels and said they should be enough to get me the final 15 or so miles. They rode off and a short while later so did I. I thanked him again when I got to Canterbury.

So when I started my search for a club; Oxted was my first choice. The chairman, Russell, was very welcoming and after two rides I knew my preconceptions about cycling clubs were wrong. I joined and am very glad I did.

Everyone in the club has been friendly and encouraging. I’ve ridden TT’s and much bigger distances than I thought I could. I can choose the type of ride I feel like doing. Either a gentle social ride or a faster, social ride. We nearly always include a cafe stop. Cycling and coffee have a very close bond. Chatting before a ride, then over coffee is a very pleasant way to spend time. I have more great friends. And the routes I now ride are more varied, with an expanding list of great cafes too.

I'm not sure exactly how many are in the club, but there is always a good turnout, even during the winter. Many rides bring everyone from the different groups together at the same cafe.

When I had a crash everyone came together. Family and friends supported me, being part of a club made a big difference. I had advise, practical help and encouragement. Having those three spheres backing me definitely aided my recovery.

You don’t need the latest bike or expensive clothing, just keep it all well maintained and comfortable. There is plenty of advice available when needed.

Has cycling got a problem?

What’s the problem you ask?

I don’t think cycling actively excludes anyone. Please tell me if I'm wrong.

It bothers me that I mostly see people like me generally riding or attending cycling events, taking part in sportives etc. My club has less women and other ethnicities as members. It’s a very welcoming environment so I know we aren’t disuading or preventing anyone joining.

Cycling has a safety issue, I know that will put a lot of people off. This will only improve when society, media, the police and government have a change in attitude and priorities.

I do my best to push for safer roads. Through contacting my local councilors and MP and reporting bad driving to the police. Unfortunately I don’t feel I’m gettig very far. I support organisations that are doing this nationally.

When I watch racing it’s the same. Although I think that’s more influenced by money. Wealthier countries have run schemes to encourage racing at a young age, and to continue that support until pro teams become involved. They also have many pro teams to increase the scope for making a living from the sport. These organisations choose from those available; so it again comes back to creating a more diverse community.

Cycling needs investment in developing countries if they aren't to follow us and have the car become dominant.

We need to do this to ensure people aren’t left behind as cars are seen as too polluting and expensive to use. Cycling needs to become a viable means of transport for the majority, especially in urban areas.

It’s frustrating that the solution could be as simple as making cycling safer.

When it’s seen as normal for everyone we will see more divercity at all levels. Maybe it's more complicated than I think.

What have I missed? What other barriers are there? What can I do?