What a diff'rence a day made Twenty-four little hours 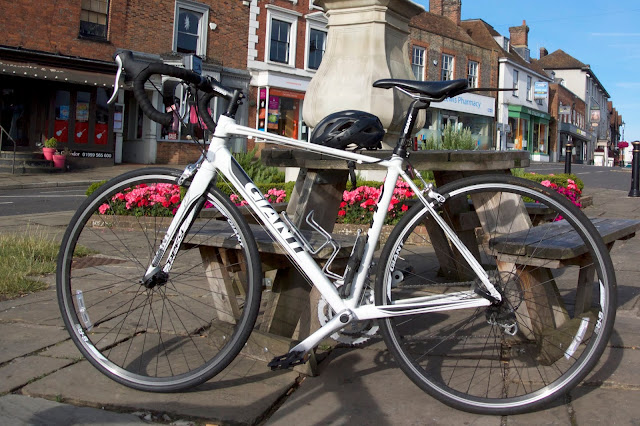 Brought the sun and the flowers. Where there used to be rain.

After yesterday's grim weather it was good to be out in the sunshine. I was alone again so the road bike was my chosen steed. I think as I add miles to it the brakes are improving. Before I bought it second hand, the bike had only been used occasionally. It still has the new bike health and safety stickers. The last time I had a new bike I was as a kid. I don't remember any such stickers being on my Raleigh Chopper. The only warning was to not carry passengers on a seat clearly designed for two. I was never joined by a friend on the bike, it was too heavy with just me. With only three gears any hill was tough enough.

There are at least three stickers suggesting you check that the wheels and pedals are attached. There could be more that I haven't noticed yet, they are very small.

Because the sun was shining I travelled further, to Westerham. I didn't stop at a cafe, that's for when the team is riding. This meant I was home early to start the chores for the day. Once that was done I could sit down to catch up with the Tour de France. It's looking good for the French with Alaphilippe ahead by just over two minutes after stage 14 of 21.

Cycling is the only sport I watch, maybe with an occasional cricket match.

Motorsport is influenced more by money now. There is a human element to it, but it's not the deciding factor.

There is big money in cycling, Ineos and the other top teams spend millions. But if their top rider has an off day it could be all over.

It's easier to relate it to my cycling. I know my bike is worth only a very small fraction of theirs, and I don't ride as fast or as far. But when they are pushing themselves on a climb, I know what it feels like.


I do a few all day rides but miss multi-day routes. Riding to Paris with two mates a few years ago was great. We arranged everything amongst ourselves and carried cloths etc on the bikes. Being self sufficient made the feeling we got approaching the Eiffel Tower even sweeter. Four days just thinking about cycling. It was tough at times, but worth it.


For more of my work, go to my Facebook page.
and
website
Posted by AFS Photography at 13:22:00 No comments: