A link to my dad 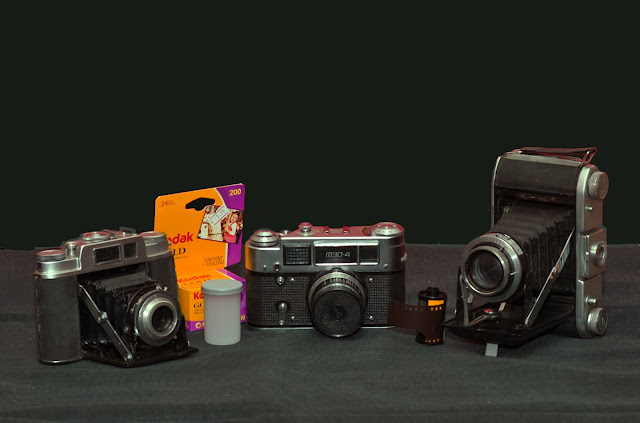 Whilst rearranging storage to make room for my home office I opened a box that contained three film cameras. One is mine, the others belonged to my dad.

I have not used them in a very long time.

Film is hard to buy, few places stock it. Luckily I have a camera shop near me that had some, but not for dad's cameras. They are medium format and use 120mm film. I'd have to order it, processing would be another challenge. They are also far from straightforward to use, with shutter and aperture settings spread around the lens rather than on the camera body.

Film has been in decline for a long time. Many people will never have loaded film into a camera, instead they would have insert a memory card. Taking a picture and not seeing the results until the roll was developed would be also be a weird experience.

I have mentioned this before; my dad was an avid photographer when we were kids. He developed the film too. We have many draws full of prints.

Using his cameras will kind of linked us both again.

When I bought the two rolls I asked if rather than being printed they could be supplied digitally. Yes was the answer; saved to a CD. Who has access to a computer with a CD drive nowadays? I asked about a USB drive, and they said if I bring one they will copy onto it. Surely a better way would be via download from web storage. It's the way I deliver pictures to people.

I wish now that I had been more involved with my dads photography when I was growing up. And that digital had come into my life earlier.

As I took the pictures in this post it really hit me what a missed opportunity it was to not to have been part of his hobby.

I did use my film camera a lot, until my late teens. And then I rarely took a photograph; maybe the occasional holiday snap. Another regret.

I often think about my dad. Photography focuses me. This film project more so.

They are an Agfa Isolette L and an older Ensign Selfix 820. Both being completely manual, not even having a rangefinder. I do remember seeing a device that clipped to the top to measure distance for focusing. But I don't know where it is now. The newer one does at least have a light meter.

My camera is the FED 4, is much more modern. I say my camera; I don't remember if it was bought for me, or I borrowed it.

I'll just use the FED 4, searching online for their history the other two could well be seventy to eighty years old. Unfortunately the leather case of the Ensign partially came apart as I opened it, so it and the Agfa will be going back in cupboard.

I can't walk far at the moment, so the photowalk will have to wait. I want to revisit locations where I've previously taken pictures with the digital camera.