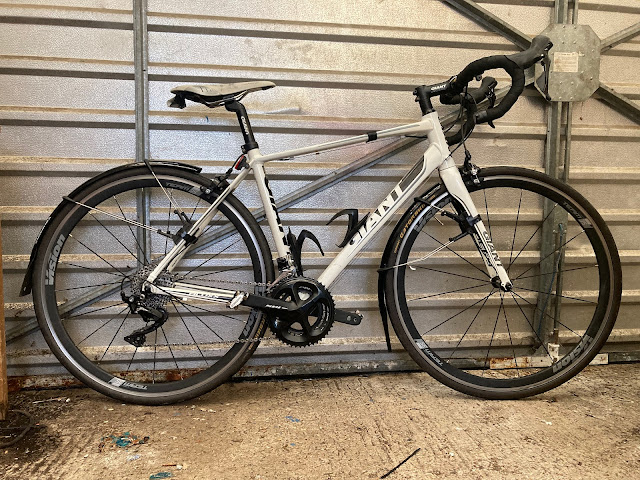 I've had them on the mountain bike, although none are attached at the moment. They broke and were not replaced. When I did have them their placement was high above the tyres, keeping my bum dryish, but not much else. Thinking about it now I could have saved money; I just needed two cheap solutions. An ass saver as they are called; clips under the saddle, sticking out about six inches. Plus a flexible guard between the fork brace and the crown. My saddle bag replaces the ass saver, I could cut up an innertube for the front.

It's a first for the road bike. These are much closer to the tyre, and should keep me dryer by cutting the amount of water hitting my shoes and back. They also reduce the spray thrown up behind me at following riders.

I only had time to fit the rear one before the club ride last weekend. They do increase aerodynamic drag, I'm not sure by how much. The past few weeks have seen many injuries, you can read previous posts about them. For this reason I intended to join the T3 group, at the last minute I changed my mind and chose T4.

Let me explain. The rides are graded to allow for different fitness levels, the higher the number the stronger you need to be. It usually means a longer distance at a higher pace, maybe no cafe stop for 4 and above. I have been moving between the two groups for a while, depending on which was running and how I felt.

I'm not sure if the extra resistance was the problem or the battering my legs have received lately. But after about forty miles I was being dropped on some climbs, something that rarely happens. No-one is left behind, so I was able to catch up as they slowed at the top. I was wearing thicker gloves that made opening food on the move more difficult. I normally eat every hour, but not this time. I was eating if we stopped to discuss the route. Energy levels were low when I asked about a cafe break. Eventually we found a burger and chips type place. The coffee was good and supper hot. It meant that we had to drink slowly. This allowed me to scoff all the food I had left in my bag. I felt much better for the last twenty or so miles.

I fitted the front section during the week, and rode with the T3's on Saturday. I felt much better, it doesn't appear that I have added too much extra drag to the bike.

A change of routine on Sunday, Matt's bike is with Ross Cycles, I went for a ride with my club again. A loop out around Brands Hatch. Pretty windy, but not cold; the sun even made an appearance.

What do I think of the mudguards?

They were fiddly to fit, initially either too close and rubbing, or too far away from the wheel and flapping about.

Longer versions that further reduce spray are available but wouldn't fit under the brake calipers.

I'll see how they stand up to being used, and the level of protection provided.

And of course there is the question of wind resistance.

They cause the wheels to catch side winds more. So on Sunday it was a little trickier on the more exposed lanes.

A fairly mundane post this week; the change to more wet and generally grey weather always affects my mood.

I still want to ride my bike, but everything needs a little more prep. Extra layers, can mean being sweaty, not enough and I'm cold. Drying the cloths in time for the next outing can be a problem. And then there are the bikes. I'm determined to look after them better, I use to just leave them in the garage when I got home. That was okay when I only did 30 to 40 miles a week. My average is now 150 which means they are wearing out parts much quicker. At the very least I now dry the chain before leaving them. At the weekends a bit of bike TLC is needed, even a clean. I could spend more time on the trainer, out of the weather, but it is very boring. Maybe I'll take the iPad out there and watch youtube.