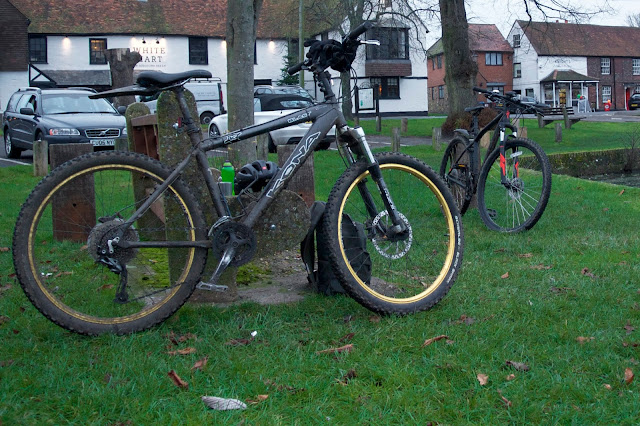 The weekend came around quickly, two bank holidays and day off will do that to a working week.

Saturday was warm for the time of year, so we wanted to cycle a bit further than normal. I have cycled to Godstone Green a few times this year when out alone. I climb the Enterdent to add some distance and extra challenge. It had been some time since Matt and I had drunk tea at the green so it was agreed this was to be our destination. With the addition of the Enterdent. This is usually part of our joint route to Merstham and the Hungers End cafe so Matt hadn't rode it for a long time. As is always the case it appears daunting but isn't too hard once you get into it.

The green was bereft of Christmas decoration, which was a shame. I really wanted a picture of the bikes with lights in the background.

Sunday was very foggy, as I left the house visibility was so bad I thought about aborting. But as I rode into the valley it got a lot better. I arrived a bit early so I took the chance to take a pic. 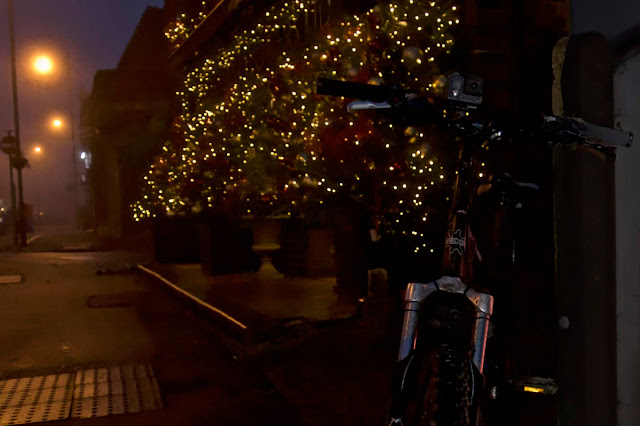 The only other lights we have seen this year have been on houses.

Matt arrived as I was putting the camera away, he hadn't noticed me so was looking at the road I normally arrive from. I wanted to walk up behind him and ask who he was looking for, but he turned to greet me before I was close enough. We went the long way to the bus stop, much safer than the Limpsfield Rd. We chatted about what we would do if we won a lot of money. The world had so many places and people to see, getting bored wasn't likely. We could also indulge our hobbies. Matt would devote time to writing, me to photography. We would obviously do more cycling.

He could spend time in his new house by the sea becoming a successful writer.

It would have a studio, setup to meet my requirements. So many studios are just white rooms with maybe a brick wall on one side. Or the sets they have don't suit my style. It would have land I could also use. Even existing or new structures that would make interesting backdrops.

We couldn't understand someone buying a lottery ticket or tickets every week, winning a large sum of money and not traveling or pursuing a hobby. Why would you go back to your old job? I can understand your friends would not have the same lifestyle you now had. But you could involve them in your new life.

Monday cycling was cancelled. My cold that started on Sunday had really taken hold when I woke up. The most debilitating part being the runny nose. I was tired with a headache but I would have gone out if it wasn't for the waterfall that was my nose.

So the last part of the last post of 2018 is a little disappointing.

For more of my work, go to my Facebook page.
and
website
Posted by AFS Photography at 12:14:00 No comments: