I haven't produced many pictures lately. Cycling has been the main source of photographic opportunity. I have written before that my cycling is becoming a more serious reason to have my camera ready. And to be on the lookout for inspiration. This month I had a family portrait session. But in the last six months I haven't used my camera much.  And I miss it. I have been thinking about what to do this year.

Some shoot ideas are taking shape. The next step is to visit the areas I want to use. It will be along the river Thames. Around Blackfriars or Tower bridge. Then select the models. But I don't think I will be doing as many hired model shoots this year. I am learning and gaining experience. But I haven't got a reason for the pictures. I need another personal project. The books I produced gave me an excuse to revisit a set of pictures. A decade of cycling.

It will be another format for my pictures to appear in. I'm considering a calendar. With the Thames as a backdrop. The people will be the focus of the portraits. But the river will connect the whole project.

The outfits I am discussing with the models will be long, light dresses that will catch the wind.

A second theme will be using architecture as a background. There are some iconic buildings along the Thames. I'll use them as part of a blurred background. A shallow depth of field should leave them recognisable without being a distraction.

This time around the outfits will be more fitted, stronger. It will be high contrast, entirely black and white.

A few months ago I was able to have my portfolio reviewed by a successful, professional photographer. He gave me a lot to think about. And the changes to the pictures displayed on my website have improved it. He said black and white pictures, if done well, are perceived as better; more professional. I'm not sure I totally agree. But I have started to process some of my cycling pictures in back and white. And after the recent family studio shoot I did. The back and white ones were remarked upon as different and very welcome.

The pictures from the cycling that I processed as black and white were misty and moody. Well suited to a monochrome finish. But earlier in the year. The autumnal tones definitely benefitted from being in colour.

It's like any processing. It has to be done right. And suit the subject. 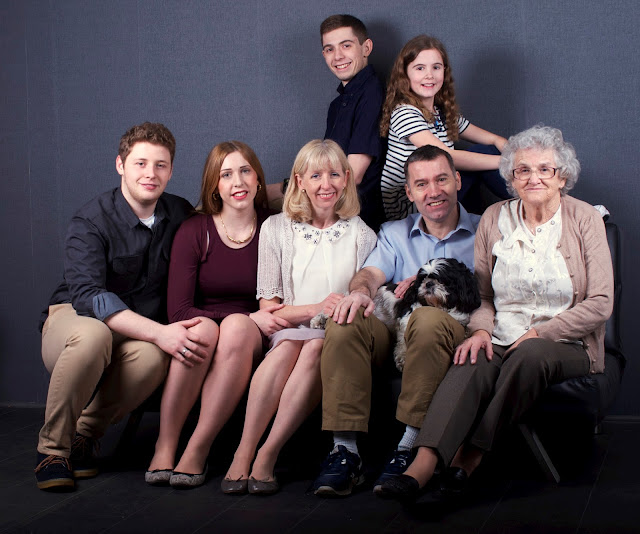 My first shoot of 2017. My niece was 21 at the beginning of 2017 and wanted some family portraits. Her mum, my sister, asked if I would be the photographer. Of course I said yes. I'd wanted to produce some family portraits again. It has been a few years since the last time.

The first thing to decide was, inside or outside. We settled on a studio shoot. It was January after all. There are plenty of studios, but I didn't want just a white infinity cove, or paper roll background. I wanted other areas to shoot in. Furniture, something that resembled a room in a house. The difference being there would be more room than if we used a real house. The owner met me at the beginning of the shoot, showed where everything was and left. If I hadn't used a studio before that could have been a problem.

I already had a clear idea about the pictures needed. My sister and I had talked a week before the shoot. Once I saw the studio I could see how we would achieve them. It was now up to me to lead the group, and keep the session flowing. Be positive and decisive. I wanted them all to relax and enjoy the experience. Not feel uncomfortable. I saw as we went along everyone did become more at ease, but still occasionally they looked a bit stiff, I knew that was not what they wanted. So I thought of a way to distract them. I asked them to look away from me and each other. I would count to three, they would look at me or each other, and I would press the shutter. I think it worked. To relax the session even more I took a picture of them, looking all over the place. 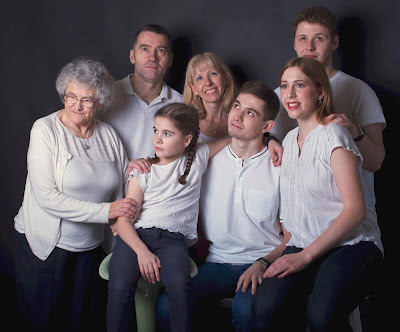 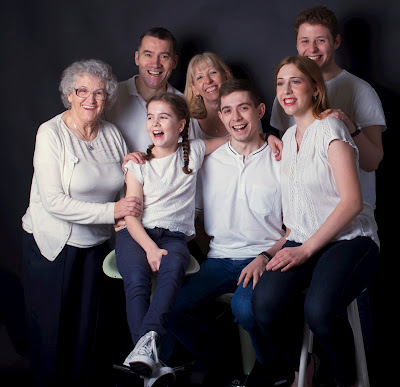 When they realised what I had done they all laughed. Leading to a picture of natural laughter. I think that is one thing that can be difficult to achieve.

The four hours flew past, they were a little surprised how quickly it went, and that I had over three hundred shots. I took that as a good sign, they must have been at ease and enjoyed the session.

I edited a couple of pictures the same evening. And uploaded them. They commented about the black background. How good the pictures looked. I wanted to produce something different. Not just high key portraits against a white background. I was very glad they noticed so quickly.

But the shoot is only half the story. I now have to edit the pictures. Which starts with reducing the number from over three hundred to a more manageable fifty. although now as I edit them, maybe fifty is too many. Next time I'll make it around thirty. I need to set that expectation before the shoot. I'm not sure how many they are expecting. I hope it's not three hundred. A lesson learnt.

I have noticed some family portraits sets appear to have been shot at different times. I'm guessing they weren't. The editing was not consistent. White balance changes from shot to shot. In a studio that shouldn't happen with good lights. The lights I was using were good, but I still noticed differences. It wasn't difficult to fix. I wanted every picture to look it's best, I also wanted the set to look it's best. Ensuring colour temperature was constant, picture to picture, so that skin tone and clothing looked the same in each shot was a basic requirement. I strived for a consistent style to the set. How I cropped some pictures, how they were lit. To give a good balance.

And to top it all. I asked for some feedback, forgetting the family connection. And it was good. 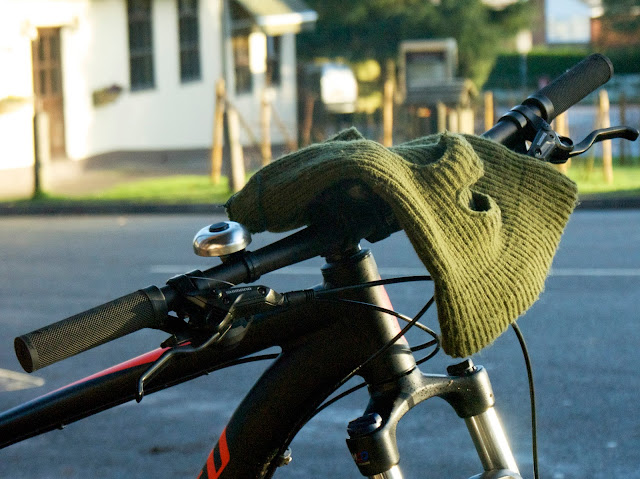 I cycle all year round. When it rains as it can at any time of the year. A coat gives reasonable protection, still not as good as the advertising gave hope of. When it's cold though. Fingers and toes suffer. I have tried various gloves and shoes. Extra layers don't seem to help either. There are lots of clothes sold under the premise that they will keep you warm and dry. I haven't found anything that can keep my fingers and toes warm. I have even resorted to shoes one size too big so I can wear two pairs of socks. One of which were hiking socks. Designed, they said, to keep feet warm in extreme conditions. It was the same with gloves. An extra layer of base layer gloves, under my "winter" cycling gloves. After a short time, cold fingers and toes.

I mentioned rain earlier. I have had cycling coats that have been anything but rain resistant, never mind waterproof. A days cycling in the rain on the first leg of a London to Paris ride ended with me removing soaked money and passport from a jacket pocket. Not what I expected from a waterproof coat. I thought maybe it was the cost that was the difference. But I'm not so sure. The picture in this post is Matt's balaclava. I think he bought it from Millets. It keeps him warm even in the snow. I have a cycling specific hat. I'm sure it cost more than Matt's solution. It does work so I'm not complaining. But it's the cost compared to cheaper alternatives that annoys me. It seems that any hobby or interest specific accessories always have an extra cost.

Any suggestions about ways to keep my fingers and toes warm, gratefully received.