Puncture, lets the air out of my week. 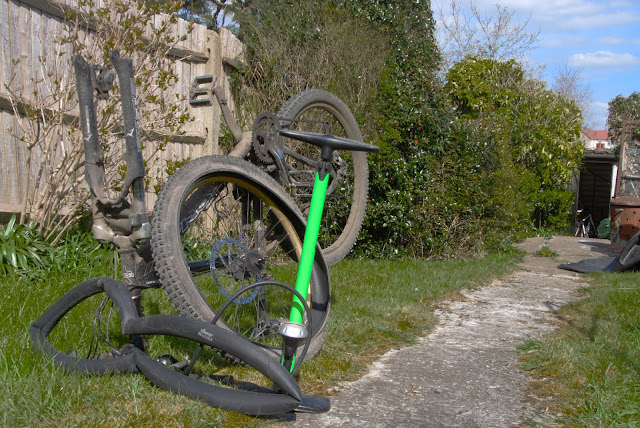 Another week has gone by, the weather is better, slightly less cars on the road, I rode more off road; and I got a puncture. It also seems that my bikes have a "good side". Scrolling down this page I realise I have a habit of photographing the left side of the bikes in most pictures. I'll try to vary it a bit.

Monday. Not much to say, except riding along quiet bridleways and lanes is a pleasant change from busy roads. But I'll need to keep it varied, I don't want it to become boring, especially if the situation continues for the rest of the month.

Tuesday I did two loops to increase the distance, but got a puncture. I can't remember when I last had one. I saw a twig stuck to the front tyre and had a decision to make; leave it and hope it didn't do any damage, or pull it out. I thought it was maybe stuck in the knobbly part of the tyre, so I pulled it out. I was wrong, the thorn was plugging the hole I had now opened. It was a very small leak so I elected not to fix it at the roadside and rode home. I needed the most sophisticated of puncture detection tools; a bucket of water. The hole was so small I couldn't hear the air escaping, only the bubbles allowed me to locate the damage. Being at home also meant I could drink tea as I patched the tyre.

Wednesday was more laps of my off road route. I need to find an alternative; I have taken about as many new photos of it as I can.

I ride around a quarry, it looks like a big sand pit. The ground is very bumpy, churned up by horses. Lowering the tyre pressure has made it a little more comfortable, and more of a workout. It's up and down most of the way. The broken surface makes the short sections of flat hard going, and the climbs tough. Going down hill requires concentration, picking the best path over or avoiding tree roots and rocks.

Thursday I added some miles to the road bike. 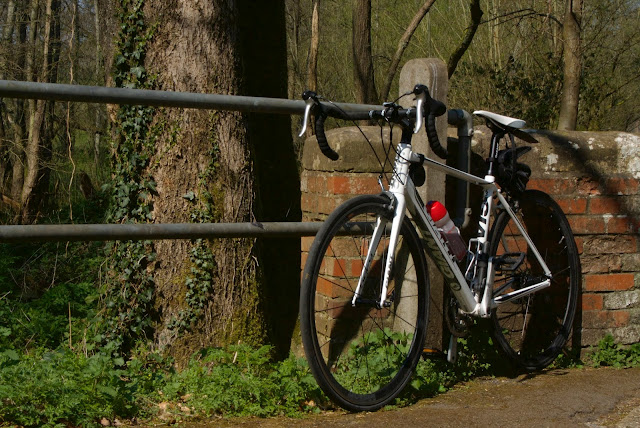 Down to Godstone, with a stop at a small bridge for a drink and an energy gel. It was the hottest day so far. I wanted an easier ride, but there isn't one without a tough climb. The Enterdent is a hill just past where the picture was taken, I chose to avoid it this time.

On the way back a peacock walked along the lane beside me for a while before disappearing through a hedge. I have seen rabbits, pigeons, deer, squirrels and pheasant but this was a first.

The roads were noticeably quieter, less cars and more cyclists. The other riders I see rarely reply to my "hello" or wave. You're on the other side of the road, well out of the danger zone.

Good Friday came as they all have lately: have breakfast, help Marcia to get ready for her online physio session, then go out for my government sanctioned exercise. 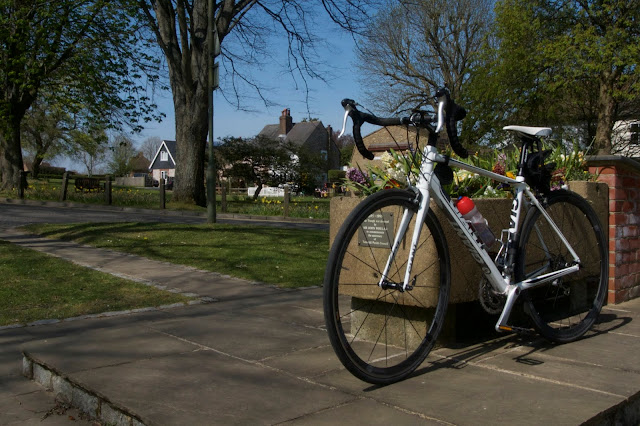 I not an old woman, but I swallowed a fly. It was on an uphill bit so I was mouth wide open. Before I had a chance to get rid of it, it was gone. The rest of the ride was unremarkable, if a little hot. I do wish my fellow cyclists would cheer up. Only two returned my waves. It's great weather and there are slightly less motorists about, which should be enjoyed. With all the stress and hardship at the moment, we need to count our blessings.

Saturday rolled around again. After the morning schedule was completed, I had to decide where to ride. 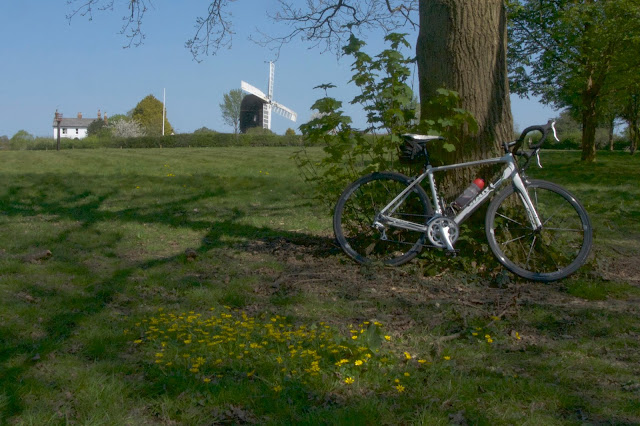 Smallfields isn't too far from home and is a place I haven't been for a while. I had forgotten the steep hills around the village. Luckily they were shaded from the sun; it was hotter than yesterday.

The road bike may have: an unpadded saddle, harder tyres, no suspension and rim brakes, but it is becoming the bike I prefer to ride; at least in the dry. The upgrades of brakes, and wheels plus the new saddle have been worth it. I now enjoy riding it more than the mountain bike. Maybe it's the faster response to my extra efforts, or that it's less about maintaining momentum. 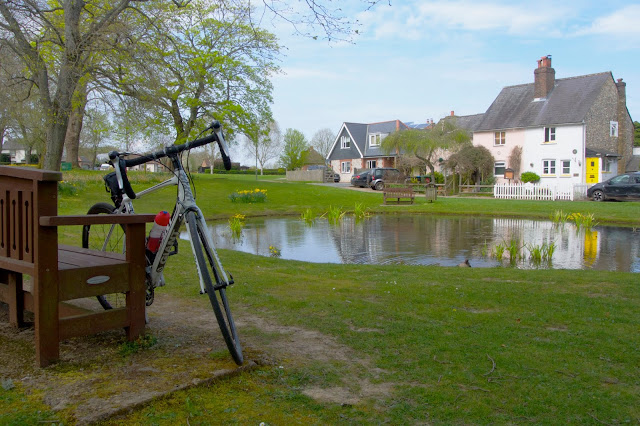 Today I went past Tatsfield church, then into the village again. There was no-one around the pond so I took the opportunity to take the picture above. As we are all on hold, nature is moving on from winter to spring, then summer. Getting out is a good reminder that everyday is a blessing, and that I am lucky to live so close to the countryside. I'd still cycle everyday if I were in a big town or city, but I wouldn't have access to such a variety of vistas.


The lockdown has been extended, the media is full of cyclists. With the right lens it can be made to seem they are riding in big groups. Walkers and runners in parks are subject to similar scrutiny. Social media has picked up on this, here though they just don't like anyone on a bike. There is much less written about motorists making unnecessary journeys, and the increase in speeding.

Cities across the world are restricting motor vehicles to give more room to pedestrians, and cyclists; London suspends the congestion charge, encouraging people into cars. Parks are being closed, and the police are driving around the ones still open telling everyone to keep moving. They are even tweeting that if necessary they will inspect shopping trolleys for non essential items. There is no list of essential items, so it would appear the police think they can decide for themselves. When challenged the tweet is said to have been written by someone without authority to make such statements. Very worrying when we should be able to trust official sources. Or are they just testing how far we will let them go?

I had hoped this situation would have changed the UK's bias towards motorised transport, and encouraged people to consider their driving habits. Or at least reduce the anti-cycling propaganda. I really don't want the government to ban the way I cope with life. I have covered many miles in the last three weeks, it's not just about being physically fitter; mentally I am much better now. Anxiety about the future does make an appearance, but I can put it in a box marked not something I can deal with now.

To lighten the mood, here are some ducks. 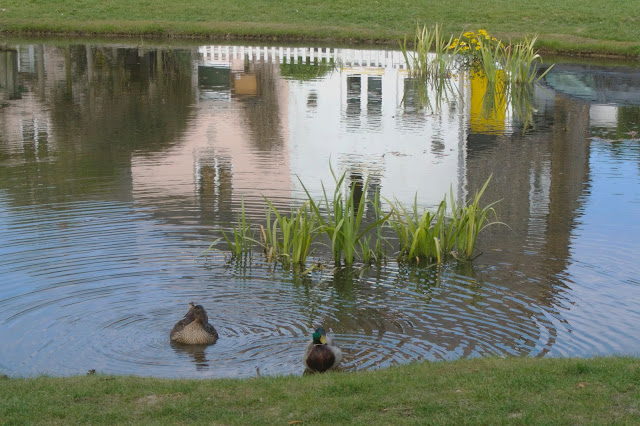