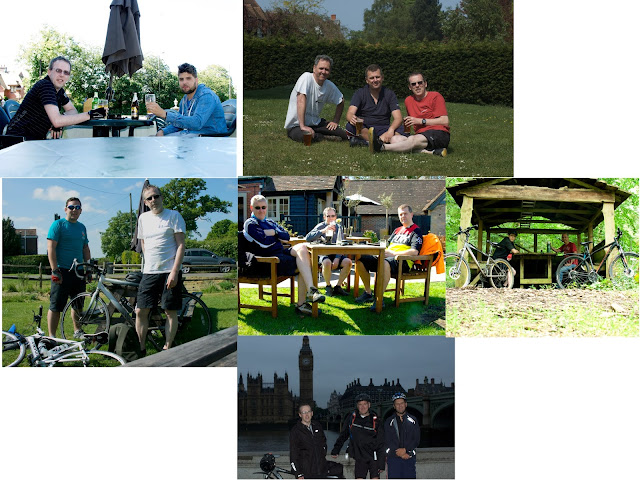 It's great that cycling with friends is back, rides to meet Matt for tea and chat, with Matthew, Richard and James. They are very important to me, and remain my focus. They are all about shared history: the hills we have conquered, the distances ridden, the places visited, the laughs. It's a great family to be part of.

I have met Matt every Sunday since it was allowed. I rode with Matthew and Richard last month. James last weekend; more are planned.

I also want to ride further, more often. Riding alone is okay, but where are the shared memories? Getting everyone together isn't easy. When I am free for a new adventure, they may not be and vice-versa. Cycling clubs run regular events, if there is space I can join one.

The club I was looking for couldn't be just about head down, riding as fast as possible. I had to find the right club with a strong social element. It needed to be close to me as well, my choice; Oxted Cycling Club. The only fly in the ointment is a 20% hill. Fortunately I descend into Oxted, and leave the ride early to avoid it. I've ridden up it a couple of times on the mountain bike, helped by it's very low gears. Maybe I'll try it on the road bike.

What about my week I hear you shout.

Monday; I think the warmest part of the day was as I left for my ride. I had to pump up the front tyre. No puncture, just a lack of air. It had been alright on Saturday. The Waller Hill loop was my choice. Uneventful would be the word to describe it. The rain stayed away until after I got home, which was nice.

Tuesday; the day started wet, but promised better weather to come. It got drier but much windier. I wasn't sure if it was okay to go out. The walk to the garage convinced me it sounded worse than it was. The offroad loop had small patches of mud.

The puddles were smaller elsewhere. 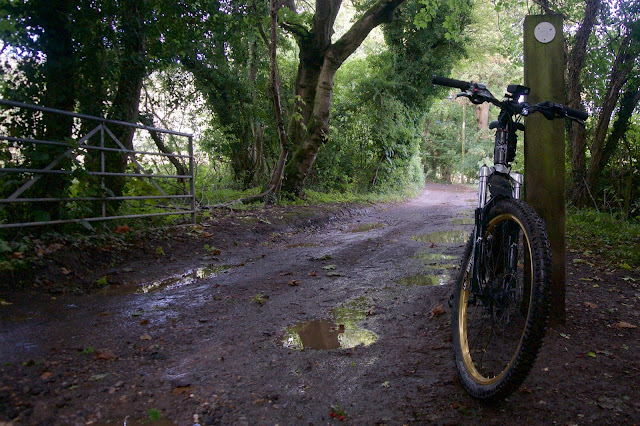 Wednesday; a mixed bag of weather during the day, at five it was dry but very windy. Out on the mountain bike, after pumping up a tyre. For the second time I had entered the garage and discovered a flat tyre. Not a puncture, just no air. Who or what was doing this?

Thursday; no rain until late afternoon. It stopped long enough for the Waller Lane loop, starting again just after I arrived home. The tyre mystery was also solved; the mountain bike has slow punctures front and rear.

No pictures, I wanted to get home quickly, just a short video.

Friday; it started grey, improving into the afternoon. And then it rained from 14:30, right through to when I left for my ride. It stopped until I got home. Same roads as Thursday, so not much to report. Added an extra light to my helmet. Much of the route is under a canopy of trees so it can get a little dim in places. 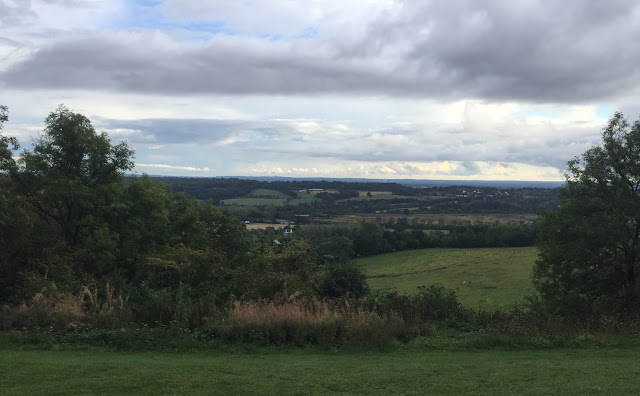 Caterham, a green a pleasant land.

I felt really good the whole way round, and was buzzing when I got home. It may have been the coffee I drank, although it was only two cups; one with breakfast and one with lunch. I have finally found a variety I like. 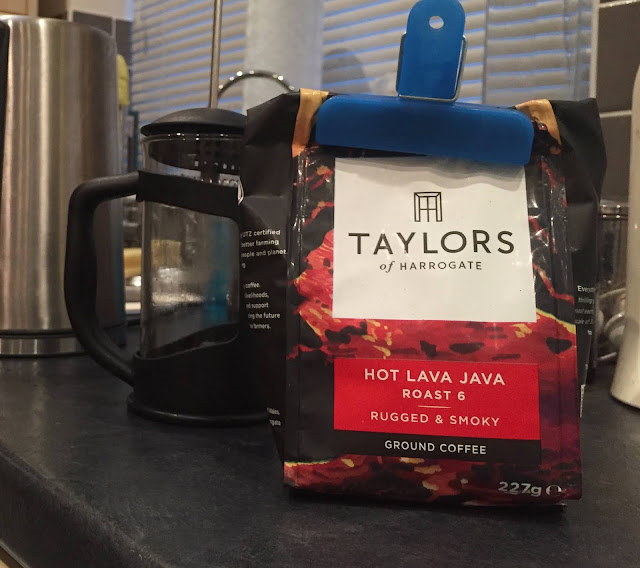 Saturday; I awoke in the early hours, it was raining heavily. I knew I would very likely go out no matter the weather, I wasn't looking forward to it though. By the time I was ready to leave the house there was a break in the downpour. I made it home with only a covering of dirt thrown up from the wet roads. As with the previous evening, I felt great the whole time. It can't just be the coffee, maybe riding less has allowed me to recover and become stronger.

A quiet Charlwood was the turn around point. 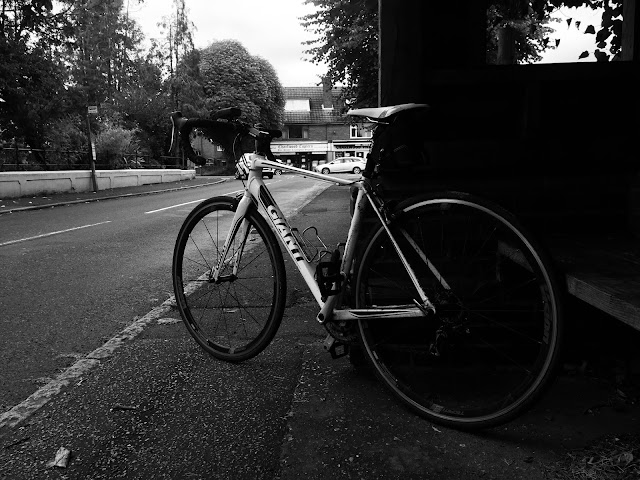 Sunday; a bit chilly, but still not cold enough to abandon the shorts. Long trousers are a sign that winter is near. I have resolved the problem of carrying my camera, and the tea mug. A couple of cable ties turn the strap into a shoulder holster, and a carabiner attaches the mug. Tea and a chat at the churchyard with Matt. A familiar and welcome start to the day of rest. 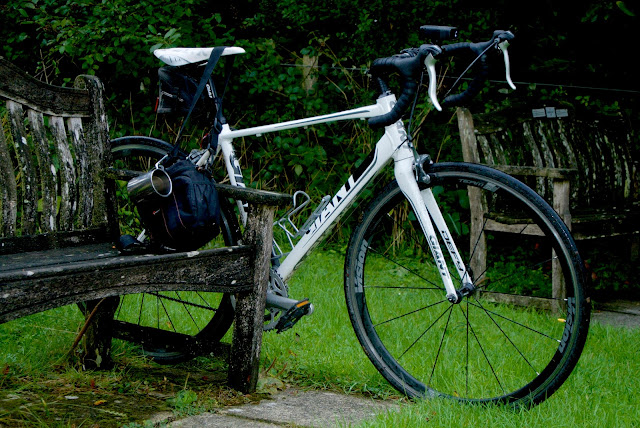 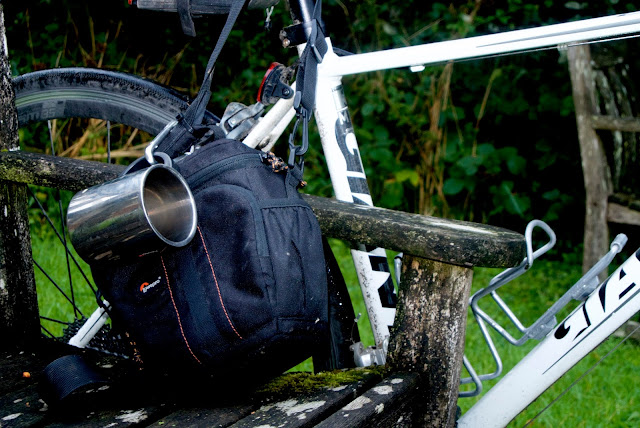 I get so much from cycling, even in bad weather I feel better. In the beginning it was tough, arriving at the bottom of hills, dreading the climbs.

My mood is more consistent, and as I have said recently my depression is being kept at bay.