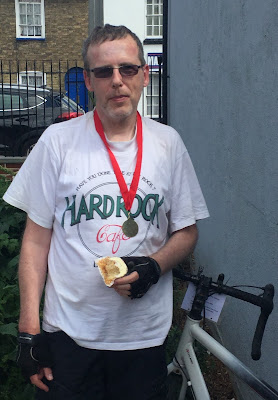 Me, a piece of cake and a medal


I hadn't participated in a sponsored ride for two years. RideLondon was a big hassle to get to, and my local Multiple Sclerosis centre don't run a sponsored event anymore.

A few weeks previously I had seen a shared event on my FB time line. It was run by a local bike shop Larner Cycles, it was on a day I was free, and it started in Caterham. So the alarm wouldn't need to go off at silly o'clock. The only issue would getting home from Canterbury. I could cycle home again, but that would be 130 miles. I knew I didn't have the time. But they said they could arrange transport, so I signed up.

The morning of the event was overcast and a little chilly, a light jacket was needed. I forgot the sun screen. But I thought I wouldn't need it so didn't return home to pick it up.

I arrived, signed on, listened to the safety briefing and was off just before nine.

I have cycled a few events and long rides on my own. I don't mind, it allows me to ride at my own pace. I don't have to push myself to keep up or wait for people to catch up with me. But this time I didn't want to ride alone. I left the start in a small group. Within a couple of miles it had strung out and I found a cyclist that was riding at roughly the same pace and me, and wanted some company. His name was Andrew. We soon settled into a comfortable pace. He was training for RideLondon. It was good to chat about my two rides. Let him know what to expect.

Andrew cycles from Peckham out to Tatsfield so some of the early route was familiar to him. I pointed out a few tougher hills he could tackle. He was after an extra challenge ahead of his big ride next month.

The first food stop was a little different from those at other events. There wasn't just bananas and energy gels. I can't eat banana, so it was good to see other fruit, cakes and chocolate.

There was much made of the lunch stop. I expected the same as the first one. How wrong I was. Tea, coffee, tasty sandwiches and muffins awaited us. It would have been all too easy to stop for a very long time. The sun was now out and making it’s presence felt. Luckily Andrew had sun screen, mine was still on the kitchen table.

After a particularly rough section, loads of gravel, flint and potholes. Andrew got a puncture. He suggested I should leave him and go on, I said I would stay. It didn't take to sort out and we were on our way again. Then maybe half a mile later he got another puncture. This time the piece of flint was easy to see, it left a slit in the tyre. He didn't have another inner tube or patches. So I gave him one of my tubes. Had I not stayed with Andrew when he got the first puncture he would have had to wait for the support vehicle.

We started together, we would finish together.

We were now around ten miles from Canterbury. I thought it would ease up a bit as the previous ten miles had included a lot of hills. If anything this last section had some of the steepest hills. Or was I getting tired?

Eventually we entered Canterbury, Andrew remarked how the traffic seemed more oppressive after the largely quiet roads we had been on for most of the ride. Although that isn't to say the quiet roads had all been pleasant. The level of selfishness shown by some drivers is hard to believe.

Before we knew it we were turning into the grounds of Tower House, and crossing the finish line.

A medal, a goody bag, and some more food including home made cakes awaited. What a great day.

Andrew hadn’t booked a lift home. Adam, the organiser, quickly organised an extra space. And without any fuss we were quickly on our way back to the start.


I’m definitely doing it again next year. Hopefully I can get a group together.

For more of my work, go to my Facebook page.
and
Website
Posted by AFS Photography at 18:14:00