This is not what the countryside is for 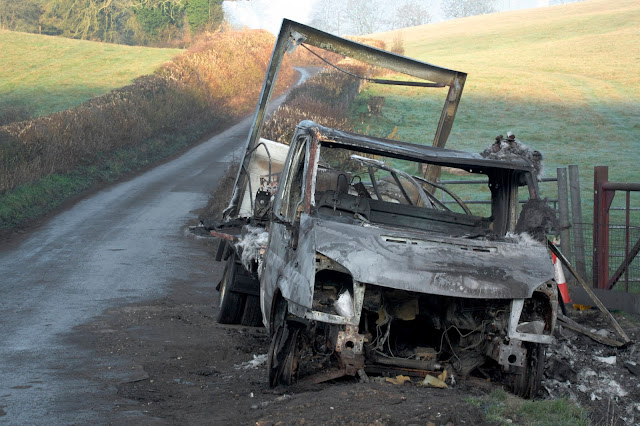 Our countryside is blighted again with the mess left by morons. It's the second time in the last twelve months this spot has had a burnt out van in it. We need to protect our countryside.

More often now Matt and I have to cycle past the results of fly tipping. This is even worse, the fire would have caused a poisonous cloud and contaminated the ground. Then there is the cost of clearing it up.

I'm not a fan of CCTV, and it's massive expansion, but it really is the only way to tackle this. The van had no engine so someone must have towed it.

In other news; the weather is on the turn, still a little chilly and foggy in the morning. But it very quickly warms and brightens up.

As I left the house to meet Matt it was overcast, but clear. Only as we neared the bus stop did the fog become a problem. And once again, a lot of people seemed not to notice the reduced visibility. Cars, vans, and bicycles passed us without lights.

It was part of the conversation we had as we drank our tea.

Is the general population getting dumber? It seems evolution is in reverse as far as humans are concerned.

They need decisions to be made for them, they can't possibly be held accountable for anything.
They are less considerate of others, and are quicker to anger.
They are always looking for someone to influence them, or to emulate. Often the influencers lives are made up for TV. The reality TV where little of it is reality.

It was good to read that the BRITS banned the stars of these pointless shows from the red carpet and afterparties. Maybe there is some hope.

And it gets worse; the people who have influence or control treat us with contempt. More interested in their future than ours.

I'm so glad that we get out on our bikes and for a short time at least try to switch off.

Email ThisBlogThis!Share to TwitterShare to FacebookShare to Pinterest
Labels: burnt out, fly tipping