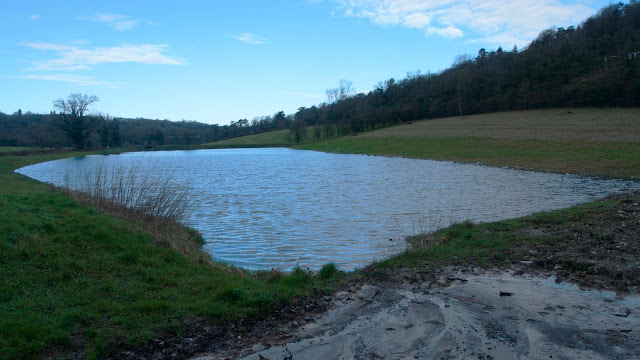 As the weekend approached it seemed unlikely we'd get one ride; two could be out of the question.

The picture above was taken on my way home on Sunday. It's normally a very small stream, barely a trickle. The recent rain had tested the flood defences built a few years ago.

Saturday was a little late to start, but we still had time for the long way to the bus stop.

The usual type of chat ensued, a bit about the Coronavirus and the panic surrounding it. Every grocery shop is sold out of hand sanitiser and for some reason toilet roll. It's not just here; a video from Australia went viral, excuse the pun, when people started a fight for bog paper.

Sunday, again was a late start, Matt initially sent an abort text. It wasn't raining at my house so I was determined to get out. When Matt sent another text saying it was dry and he was on his way; all was good.

The same route as Saturday resulted in more general chat. We often think what it would be like if anyone else were to join us. To be honest I don't think they would get it. There was Phil for a while, but he drifted away to cycle with people from his company.

One thing that did come up was my reaction to two cars that overtook us on a narrow lane. Matt said I was a little unfair, especially to the second one. Thinking back maybe I was; a little. He did wait for a slightly wider section of road. But when he did pass he barely gave me any time or space to move aside before accelerating quickly. There are lots of potholes and plenty of mud. I could easily have bounced or slide into his path.

I explained to Matt that I get so passionate about cycling because I need it. I didn't realise how much until recently. The number of close passes are increasing; a really close shave had me thinking seriously about cycling straight home. And possibly never cycling again. Near to meeting Matt on Saturday a Coughlans delivery van caused more concern.

Cycling started as a way to get fit, and have a laugh with friends. Now it's good for my mental health. I have grown to almost depend on the rides to reset after a bad week, and to help prepare for the next one. It's my reason to be cheerful.

It does anger me that I may have to stop riding if it doesn't get safer.

The police, my MP, the media; all say they want less motor traffic, and more cyclists. But do little to encourage it.

For more of my work, go to my Facebook page.
and
website
Posted by AFS Photography at 08:26:00