I've been cycling much more than normal over the past few months. It took me a while to adjust, and then it became routine. Unfortunately so did the usual routes and destinations. I had a dip in motivation; reversed by exploring new places. As traffic increased my criteria changed. I looked for quiet lanes, which meant two weeks of cycling through Bletchingley, Outwood; turning around at Smallfields. Three or four miles at the beginning is really poorly surfaced - potholes, gouges and sunken drain covers. This short section was putting me off going out. It's not just hills or distance that causes fatigue; constant jarring can be equally tiring. On Monday I tested an alternative. There is more time in the saddle, but it's worth it.

Most of the route is this well surfaced, and the drivers know how to overtake cyclists.

The steps drew my attention to a big house - easy mounting and dismounting from your horse at the gate. 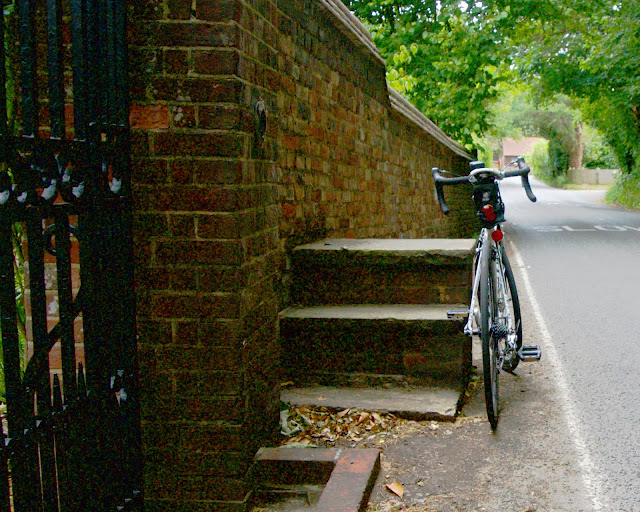 Even the rain during the second half of the week didn't dampen my enthusiasm.
Wednesday and Thursday I missed the short showers, but Friday I got soaked. It was on my way home. I was getting hot by then, so it didn't really affect me. I hope the weather improves again, or am I spoilt?