A tale of two jerseys

When I first returned to cycling it was in normal clothes, jeans and a t-shirt. I rode a bike given to me by my brother. As the distances and frequency increased I wanted to be more comfortable.

Looking for a replacement bike, I couldn't believe how expensive they were; I wasn't after a top of the range one, but it needed to be reasonable. So I bought my Kona through ebay, the spec was better than I could afford new; it was only eighteen months old.

A few years later I planned to do RideLondon, so a road bike was needed. I faced the same problem, resolved in the same way. This time it was older, I upgraded the brakes straight away. You need to buy well above entry level for them to be effective.

Last year I looked for a newer road bike, with some better features aimed at comfort. Second hand made it affordable, but again the brakes were a joke. It wasn't a starter bike, costing nearly £1000 when new, so I would have expected better. Looking at other bikes in that price range and higher, the same penny pinching is still evident today. It's had a few updates that I have mentioned previously to bring it closer to what it should have been.

The clothing purchases started with padded under shorts. Then a coat to keep me dry, which it didn't. A pair of trousers was next, light enough that they dried quickly but still able to keep me warm; and shorts for the summer.

That was it until March this year. Being furloughed meant I rode everyday. The weather was mostly brilliant, but I still needed some extra items, and more than one change of clothing. I looked at jerseys, and some more shorts. Buying from a big, well known brand is expensive. I found an alternative, that fitted well and had brilliant customer service.(d2d Cycling Clothing)

It appeared that the more premium producers used better fabrics, and spent a lot on development, hence the price difference.

Knowing a bit more I looked at these premium manufacturers, I found that they did list alternatives to polyester. Or varying percentages of polyester and something else, not always lycra as you'd expect. Some would just say "made of quality Italian materials", whatever that means.

The short sleeved jerseys I have are 100% polyester, the long sleeved one has 10% spandex. Many months of wearing and washing hasn't affected them. I then bought a Rapha jersey, ex-display so nowhere near full price. What exotic material did it use to justify being double the RRP? The majority is polyester except for the stripe on one sleeve, which is 88% nylon and 12% Elastane. It could be the zip, it doesn't look like an expensive alloy though. In fact, the Rapha jersey doesn't have the grip tap around the bottom like the D2D has; it's just at the back, so you could say it's not as high spec. To access their high tech offerings I'd need to spend at least an extra 50%. I can't comment on it's longevity, it doesn't look different or fit better than to the jerseys I already own. If it wasn't discounted I wouldn't have bought it.

No-one is going to loan or give me clothing to compare, so I'll just have to pass judgement based on limited experience of the clothing available. I'm sure their racing kit is very high tech and consumes much R&D, but I'm not after every advantage, to save seconds on my rides. I just want comfortable, long lasting, affordable cyclewear. I'm not convinced paying so much has enough advantages

Now for my cycling week.

Monday; a bank holiday and really nice weather. Best of all a ride to a cafe in Westerham to meet Matt. I arrived just before him so ordered and took a seat. I was was very relaxed, and feeling great. 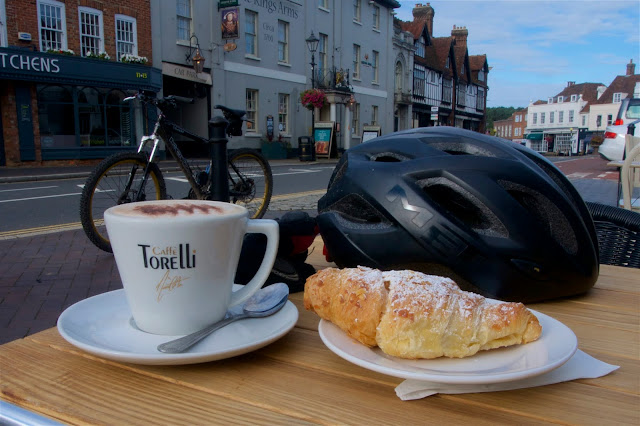 Matt arrived and we chatted over breakfast. Deli Di Luca is a friendly place to spend half an hour catching up. It would have been even better without a few wasps, attracted by Matt's cake. I know they do a great job in the garden; but why do they have such a bad attitude all the time?

Tuesday; the Waller Lane loop on the mountain bike. On the return leg, up Waller Lane two people wished me luck getting to the top. I wasn't struggling, I guess my default expression is pained.

The second video shows why most urban walks are almost impossible for Marcia and myself without using a car. The pavements are blocked by thoughtless parkers. We couldn't travel by foot and wheelchair down most side roads and even some more major ones. We are forced to drive.

The rest of the week; because I'm sure you don't need a day-by-day report.

I'm getting faster each time I ride up Waller Lane. People are still a mixture of surprised, disbelieving and impressed at my attempt.

A pic from the week. 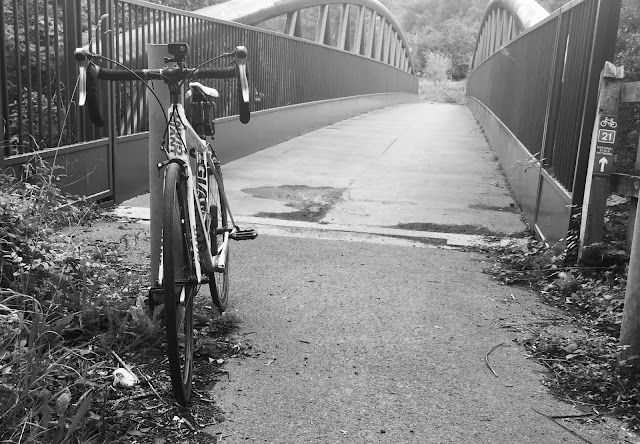 The weekend came around and I could just squeeze in a longer ride on Saturday to Eynsford. It took me back to my childhood, we would regularly visit during the summer. Eating sandwiches on the banks of the river and splashing around in the ford. We would also bring boats my dad had made, careful not to let go of them, lest they be dragged under the bridge.
And a picture as well. No, I didn't ride through it. 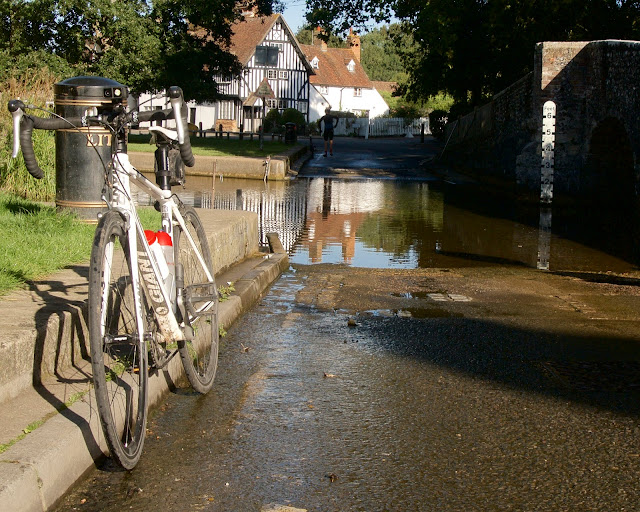 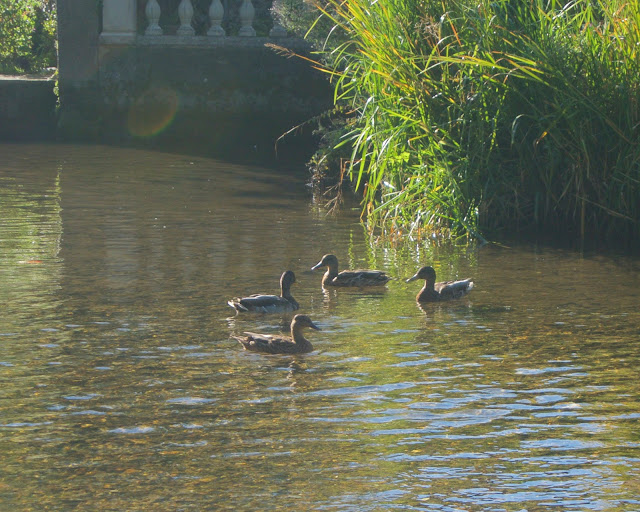 And finally a great way to end the week, cycling to the churchyard to meet Matt. There was a rumour Phil would be there; it's been years since he attended a club ride. Matt had bumped into him near Westerham on Saturday. But he he didn't appear, a shame.
Posted by AFS Photography at 10:49:00