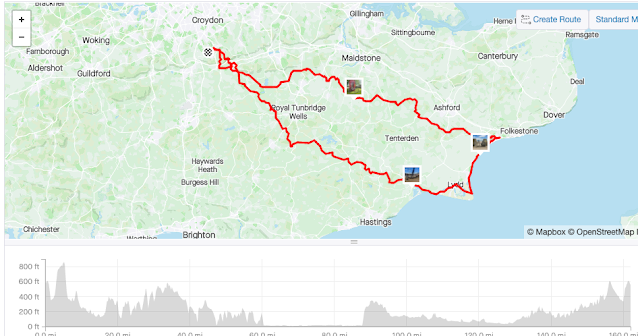 I was in two minds about writing this; I'm not one to boast. Regular readers will know I have wondered how far was too far in a day. One hundred miles is still hard, but is less of the challenge it once was. A member of my cycling club asked for companions for a one hundred and forty mile ride he had planned. It worked out perfectly; I would be able to spend the whole day away from home. The start point was around a seven mile ride, so the distance rose to one hundred and fifty four. In the end I covered 162 miles.

Two contributing factors that enabled this achievement were: I was part of a four person team. Drafting saves a lot of energy, and enabled a higher average speed. The flat marches saw our average peak at over twenty mph for that seventeen miles section. The other was a good eating and drinking strategy, I've mentioned this in a previous post. We stopped at Rye and Hythe for cafe food, gels and energy bars filled in the gaps.

Could I have gone further? Yes. Did I fancy it? No. Not because I was too tired to continue, I was let down by my clothing. More specifically the padded shorts I was wearing. Whilst not the most expensive, if it wasn't for a Strava challenge code I may not have bought them, they weren't the cheapest. The description suggested they would make extended time in the saddle comfortable. It was okay until around one hundred and twenty miles, then I began to suffer. It wasn't pain from the saddle, but moisture build up. It got so bad I spent much of the last ten miles standing up whenever possible. As I sat writing this post the discomfort was subsiding, but I was concerned about the ride to meet Matt later in the morning.

Some pictures from the ride.

It would seem I was more tired than I realised. Sunday morning whilst eating breakfast prior to riding to meet Matt; I fell asleep. Woke up after about ten minutes.