I don't mean I'll be sleeping in a cave for the next six months, although it does appeal.

The club have shorter outings and I'm less inclined to go too far on my own. If it's been freezing overnight I'll either be in the garage or going out much later, I never thought about it much before. I have ridden in snow many times, it was fun for a while. The cold sets in quickly and then it's just not nice. And I've slid off too, resulting in just cuts and bruises. This year I have discovered that I no longer bounce.

Last weekend I was repeatedly soaked, but warm. I rode to work on Friday, and overdressed. This meant I was a little sweaty on arrival, luckily no-one noticed or at least commented. It was dark on the way home but I still had to remove a layer early on.

The video is from the ride into the London on Friday, through the center of Croydon. It felt like scene a from that Hitchcock movie.

Motivation takes a nosedive; luckily the garage trainer means I can have daily exercise even when the weather is bad. It's an old school unconnected contraption, no zwift etc for me. 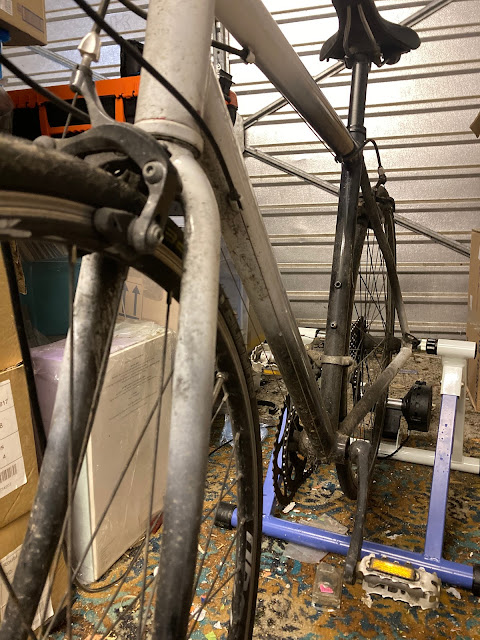 About thirty minutes is about all I can stand, it used to be an hour but a week of that and it starts to put me off riding completely. I once did over three hours to complete one hundred km, never again. Maybe next year I'll look at a smart trainer, I can race others in the club or anyone in the world.
I don't want to lose fitness, hopefully next year will see me completing a full season of time trials.
So for me hibernation is more virtual, less cafe stops mean socialising diminishes, I do less outside and spend more time in my cave. Looking forward to the first signs of spring already and the plans I have for 2023.
Posted by AFS Photography at 16:42:00