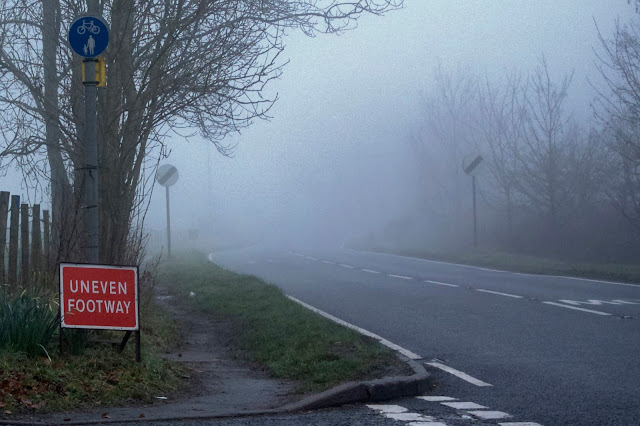 The cycling blight that is a puncture has affected our cycling again. A short while ago on another foggy morning we used the cycle path, and I got a puncture. Last weekend Matt used it to cycle home, and this morning as he approached his bike; a puncture was evident. Fixing it would have meant a later start. It's not normally a problem, but he had plans that a late return from the ride was not compatible with. So I received an abort text. It arrived when I was in the garage unlocking the bike so I went out alone.

The cycle path along the Limpsfield Rd is very poorly maintained. Often when we use it a flat tyre is the outcome. It's a fast road and is used by morons. Even in bad weather they don't slow down and often pass too close. There is a lot of news about encouraging more people to ride a bike. And plenty of money is being spent on cycle lanes etc. But very little is being done to change driver behavior. Sentencing for injuring or killing cyclists is not consistent and lenient. I know most drivers don't intentionally go out to hit cyclist, but when they do the punishment should take into account the consequences. Drivers need to know it's not okay to be inattentive, to not give others a safe space. a close pass is a driver either not paying attention or them making a decision to put someone in danger. I read everyday about close passes; which is either driving without due care and attention or dangerous driving. And in most cases the police aren't interested. The videos are there for them to see the offence. But they just don't want to know. The Met police are one of a few that target this. Surrey police rarely do.  I have stopped reporting drivers to them, what's the point?

Cycling will always be seen as dangerous and few want to change that. I feel old when I say this, but it was better when I was a kid. Cyclist aren't blameless, When I was younger few jumped red lights or rode on the pavement. Fewer used the road for time trials, there was no strava in those days.

I headed for White Lane, a steep hill past Botley. But as I approached the roundabout leading to Titsey Hill and then White Lane there were signs that the road was closed. So I continued to Tatsfield village, and through it to the steep hills beyond. With no-one to talk to time passes quickly and the ride just becomes a way to stay fit and to burn off some of the frustration built up during the week. I look forward to it, but it's better when there is a sociable element to it.

I rarely stop when I'm on my own, I only pausing to take pictures. Flower Farm is the exception. If the weather isn't too bad I'll stop there for tea and cake.

The weather is unpredictable so I don't know if we'll be out tomorrow, I hope we will.