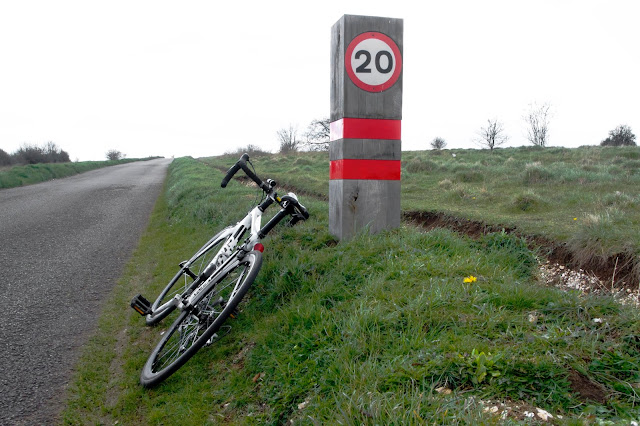 Another lunch time ride, and the number of cyclists is increasing. There are less motor vehicles, but still more than I expected. And the behaviour of some has gotten worse. I am still subject to close passes and tailgating.

Some of the new riders may not have ridden for a while, they ventured onto the roads out of necessity or because of extra free time. If they are to continue to do so, the roads have to be made safer. Many surveys say it's the danger that puts a lot of people off riding.

There are many reports of excessive speed on the now quieter roads, and calls for lower limits. The Isle of Man has instigated a 40 mph maximum. And this is a place where some roads have no restrictions.

Authorities want electric scooters restricted, but won't do the same for devices that inflict huge damage to anything they hit.

The AA are against placing any more legislation upon motorists . The AA president said speed limiters are not a good idea, his reason: a driver will just drive as fast as the restricted car will allow, even when that's not appropriate. I'd much rather a driver is restricted to twenty as they pass a school than be able to drive at any speed they want. As has been proved time after time most drivers will not lower their speed.

Many drivers even believe bikes shouldn't be allowed on roads, but object to the building of cycle paths.

Jeremy Clarkson has said public transport is only used by people who can't afford a car, he wants less space for them. He still doesn't realise the congestion he complains about is caused by too many cars. He talks about removing cycle paths; his reasoning, they restrict cars and therefore block emergency vehicles. It's the cars that do that, if more people cycled, walked, or took public transport - many journeys of under a mile are driven - the emergency vehicles he now campaigns for would have less to impede them. Public transport would be more reliable. I know a lot of what he says is for publicity, but the people who listen will be nodding their heads at his words.

He is just one example of the media message; repeatedly reporting on miscreant cyclists but rarely qualifying this with how many die in crashes caused by the drivers of motor vehicles. They make biased programs, and print poorly researched articles.

Cities around the world have created temporary bike lanes as they have restricted public transport and asked people not to drive. They have even closed roads to drivers. What has London done? Suspended the congestion charge scheme. Their reason is to allow critical workers to drive to work. They could easily have made an exception for the number plates of these workers. Ensuring the roads were kept as clear as possible.

There is no clear message in the UK promoting alternatives to cars; until there is, a lot of people will be put off using them.