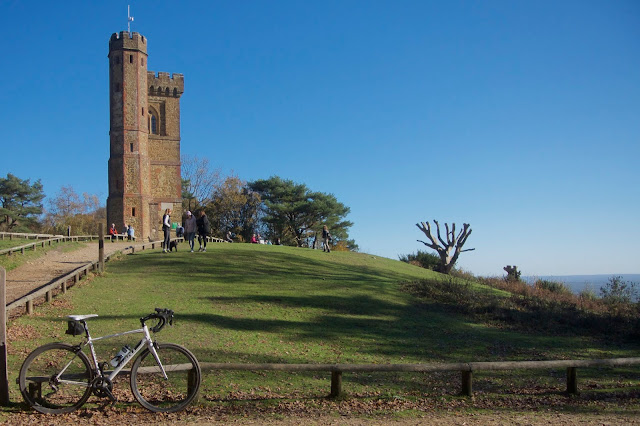 Time off work; what to do? Head out for some longer rides during the week of course. The first few days weren't great, choosing the right time to go was crucial.
On my climb to-do list was Leith Hill.

I rode Box Hill a few years ago, during RideLondon. I'd completed 70 miles as I approached it. I'm not sure what the fuss is about. Revisited on Tuesday, but didn't bother with Zig Zag Road though. Pebble Hill Road that leads up from the A25 passed Betchworth station is a far tougher test, being fairly long and peaking at 16%. The last part is the steepest. Coming down is sketchy though. The surface is poor and it's very twisty.

Ditchling Beacon was crossed off in September. It's tough, going up in steps. Each one steep but easing as your legs start to hurt allowing a short time to recover.

Leith Hill: It isn't easy, especially the section after Leith Place, but I didn't find it as challenging as expected.  I still think Pebble Hill Road is harder. The descent was far worse. As is common in Surrey the road is poorly maintained. Extreme caution is required, there are many big potholes, and lots of gravel and mud. And for a narrow road, it was used by many big lorries. Once at the top, the tower is a three quarters of a mile walk from the car park. I didn't fancy riding it, too rocky and muddy. The tea room was open, but I just ate my energy bar and gel. I've had too much cake lately.

Here are some more hills.

Waller Lane. I ride it almost everyday. The first half is hard, especially from a standing start.

Bug Hill. I didn't find as hard as expected.

Chalkpit Lane. This is tough, and long.

Succombs Hill. This has to be the toughest I have ever ridden. It's steep from the start, and then gets steeper. I have only done it a couple of times, on the mountain bike. It's made worse by being very busy and narrow. I wouldn't climb it now, too many impatient drivers would try to squeeze past.

White Lane. Another tough, short hill. I always approach it thinking I'll be okay, but half way up it starts to hurt.

Gangers Hill. Steep at the start, once you get over the first third it's not so bad.

Titsey Hill. A long hill that you just have to get stuck into. Not too bad.

White Hill Lane. A regular for me. It was daunting, not so much now.

Some pics from the week.

I have passed this herd many times, I didn't realise how big it was. My lens wasn't wide enough to capture them all, I'd estimate over a hundred.

For the rest of the week:
Thursday and Friday were local ten milers on the mountain bike. The weather looked cold, but once out it was okay - I'm still in shorts.