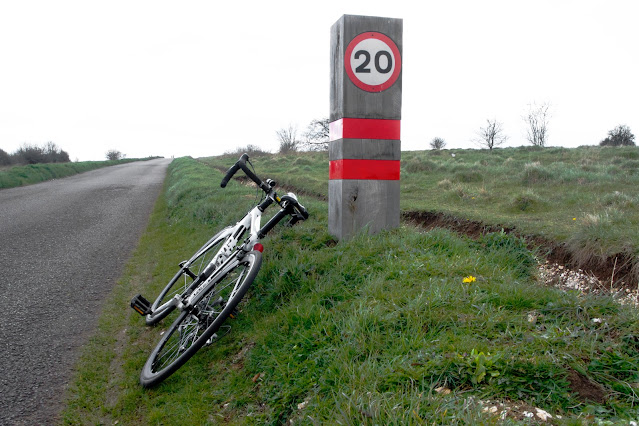 I was awoken from an afternoon kip on bank holiday Monday by the sound of a motorbike being ridden at speed not far from my house. I often hear car drivers doing the same. It got me thinking about a post a made from 2020 called 20 is plenty. I use the same picture as I did back then, because nothing much has changed.

Most drivers admit to speeding, the media don't take it seriously. Car and motorbike ads still push speed and performance. Reviewers encourage driving aggressively, especially on country lanes. These are statistically the most dangerous roads, especially for vulnerable users. Until attitudes change so that it is seen in the same way as drink driving; our roads will continue to kill almost 1800 people every year, that's around five a day.

There is technology to stop speeding. But the new laws mandating limiters allow an override; why?

I occasionally watch those fly on the wall police programs, they usually include a high speed persuit. Always deemed dangerous; they would be very much safer, or not happen if the driver couldn't exceed the speed limit.

My local councillors and MP's are a mix of it's not my responsibilty and not interested.

There are other measures that can be taken to make our neighborhoods safer: altering side roads to prevent them being used to avoid main roads, (rat running). Stop pavement parking. Setup school streets to encourage alternatives to the car school run. Organise groups of children into cycle buses. Play streets. Safe, secure storage for bikes. Unfortunately these will need those who can implement them to have more determination, and not be persuaded by a vocal minority. London boroughs have installed some of these schemes, and councillors have been re-elected, saying they will keep them and install more. So residence want them.

Police forces need to be more consistant in their treatment of bad driving reports, and be better funded.

Courts have to acknowledge the part they play. Harsher sentences and stop accepting undue hardship defences.

Figures from the Driver and Vehicle Licensing Agency (DVLA) show that neary 9,000 drivers still hold a licence despite exceeding the 12-point threshold.

Britain’s worst offender to still be legally permitted to drive has 68 points but a further six have more than 50 points and 39 have between 30 and 50 points.
Posted by AFS Photography at 13:51:00